It's the new hot-topic, there's a bazillion reviews out there, largely of which have not actually flown the goggles but they all center around one 'feature' - the Field of View. While true, the goggles do indeed have a new smaller field of view compared to that of the previous Fatshark HD3's - 43 degrees to that of the new 37 degrees, I hope to uncover some of my own findings with the goggles with my use of them.

I'd known of them since the first DRL race back in Woodward in February/March time, Wild Willy had a pair with him (prototype of course), and I got to experience them first hand. I didn't particularly notice the screen size, but I did notice the extra clarity and sharpness of the images from the get-go. I only got a brief demo of them, so I didn't really have much to say other than "they seem a little better".

Fast-forward to the end of April, and my next DRL adventure took me to Adventuredome in Las Vegas, where we were all given a pair and were allowed to race with them. 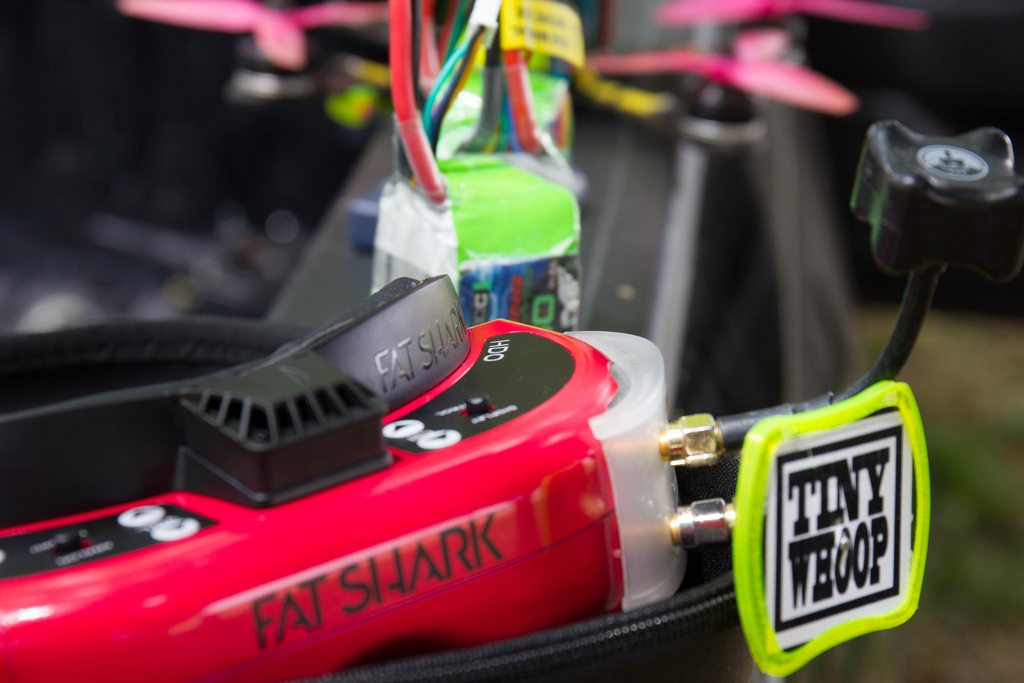 Here's my pair - they have no retail box and they have no usb-rechargable battery, but they're custom painted in my DRL colour direct from Fatshark! Initially I spent a bit of time in the hotel prior to the race switching back and forth between the HDO's and the HD3's I had brought with me just to compare the FoV first-hand - watching DVR of a previous flying session. I then used both pairs of goggles throughout the race (6 or so packs on HD3's, and then testing HDO's on the next packs). I actually stuck with the HDO's for the remainder of the race, and with good reason. The day after I got back I then attended Delta Hawks - a local fun fly event which I commonly go to. I got a chance to fully use them in a new set of flying conditions - sunny weather. And yes believe it or not in the UK it was actually sunny!!

Hey look, there's even a picture to prove it!

I've also used them now at a weekend race just gone - Miniairshow 2018 - the review was a tad delayed due to immense packing for that, so have further race experience and weather experiences with them.

So here's my thoughts:

Overall, for most pilots who WANT/can afford to upgrade, I see no reason not to. Similarly, if someone was looking at buying a pair of goggles, and wanted Fatsharks. There would never be a time I would recommend the Dom V3's or the HD3's over the HDO's - the HDO's just feel like a better goggle to me. Obviously, everyone is each to their own, but that's my $0.02 for you all :).

Oh, and for reference I started on Fatshark Attitude V2's back in 2013 before moving to Fatshark HD2's when they came out. After that I moved to HD3's due to the blurryness issue of the HD2 (I ran diopters but it still wasn't a perfect image), and now I'm here at the HDO's.