A friend of mine ordered one of these a few weeks back as he got frustrated keep having to use the USB port on his Taranis. If you use it often like me you'll have probably either broken it already - requiring a new mainboard - or you will likely know that it can be broken with only light use. I've managed to get away with mine working for a decent period of time, but as soon as he gave the go-ahead that this runs good, I had to get my own! And of course share it with you guys.

I will start initially by saying there's some configuration software on the Banggood page which I had to use to get it to work fully - it does appear to be Windows only, but it MAY work without configuration on a Mac, I cannot confirm though sorry!

The dongle is available from here:

edit: It appears for some reason the links are not working all the time, rather than pressing F5, just go to the address bar and press enter - then it works. It looks to be an issue with the Banggood website!

I keep getting asked why I do not run affiliate links in my site - so I figured I'd answer that too. I do not have a hidden agenda, the products I review are not biased in any way shape or form, and come with no hidden links to profit from. However, people seem to want me to run affiliate links in an effort to support me, for this occasion I will go with it, but I'm unlikely to stick with it :)

So what do we get for our money? The dongle is cheap, we're not after much, just a working product! :D 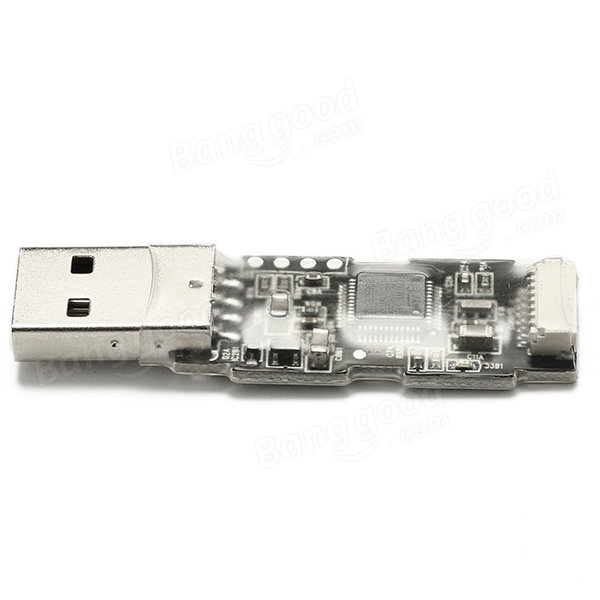 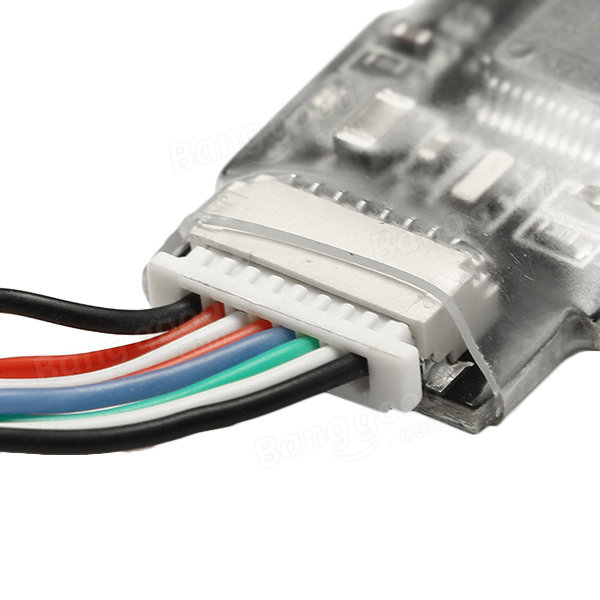 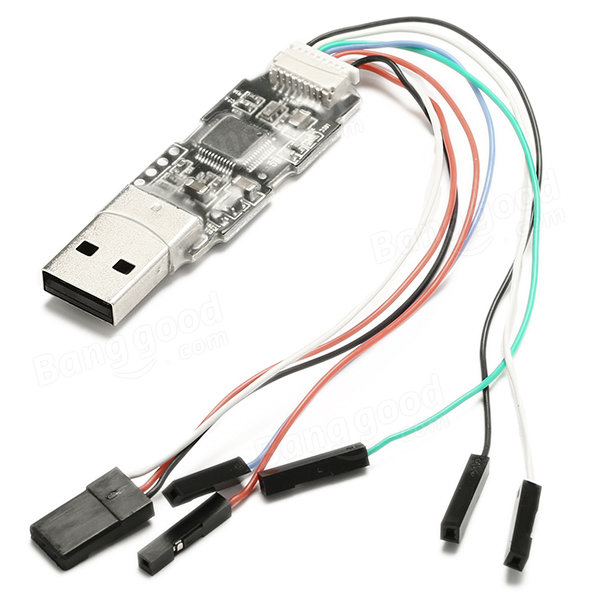 We get simply a dongle and it's associated cable that allows all of the PWM, PPM, SBUS and DSM2 configurations that we can plugin to it. I will be using a spare X8R that suffered a fatal crash (a plane), I do not trust it in flight as it suffered severe damage such as bent pins and the case was nowhere to be found, but for a simulator it's perfect. I've also tested the X4R-SB and confirmed it is working without issues. 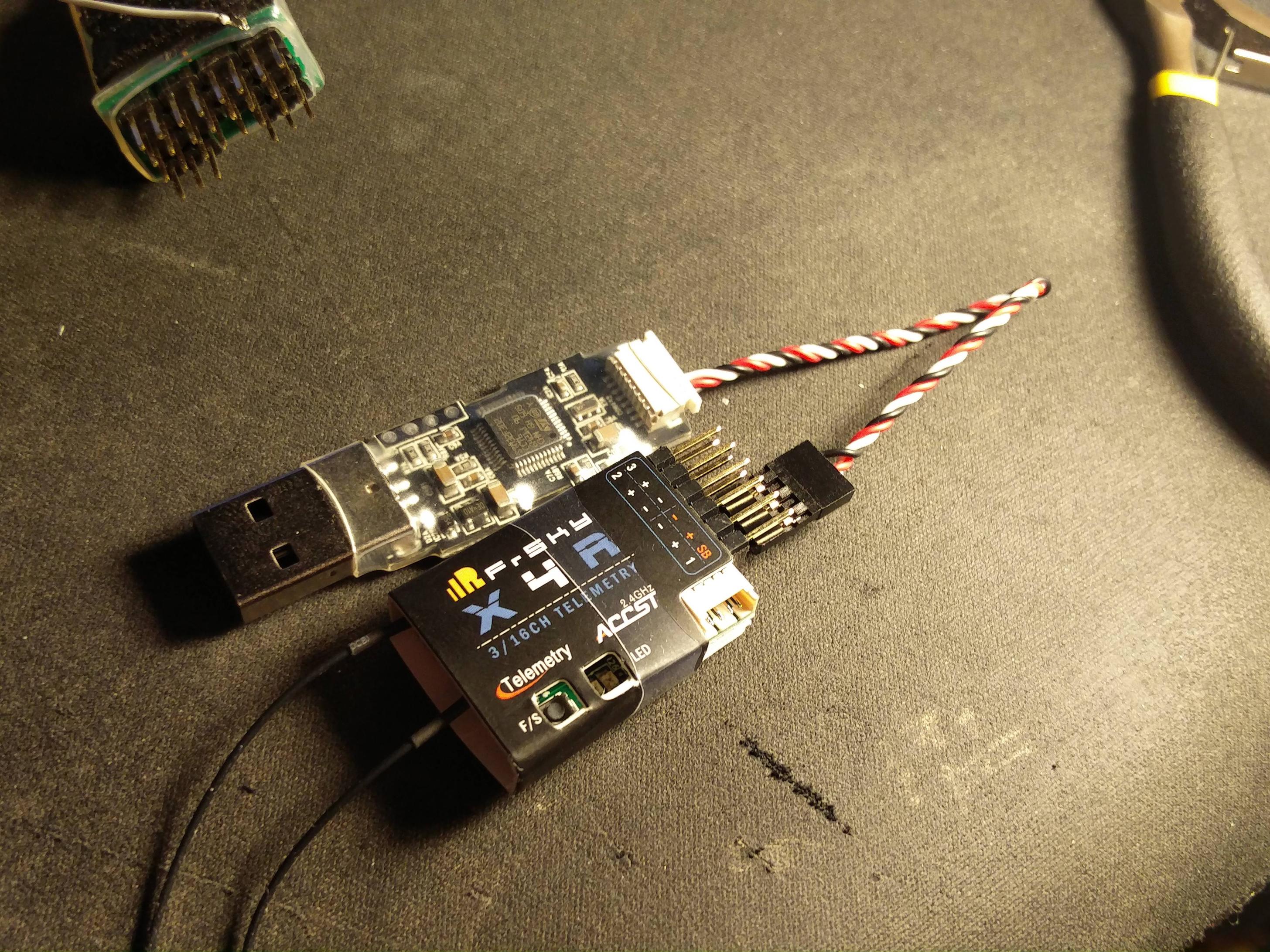 In an effort to reduce the clutter around it (and on my desk), I removed the unrequired pinouts for my X4R, and attached the main 3-pin cable - this should be adequate for all receivers that run signal over a single wire. The USB device of course powers the receiver so no extra wires, power source, or anything else are required :)

On the listing of the product is a link to download the software, you WILL require this to correctly calibrate the endpoints on your transmitter so that they show up correctly when the USB Joystick is detected. 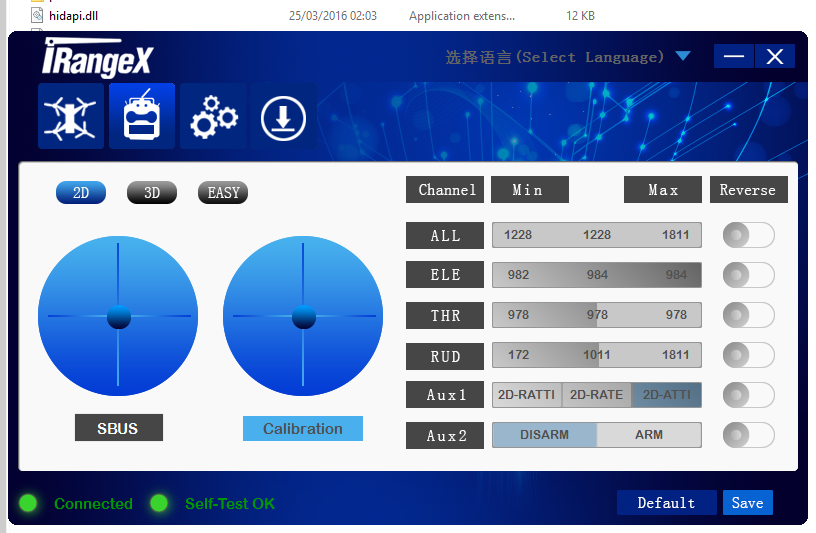 Simply unpack the software and run it, and navigate to the second set of menus that has the calibration feature.

As usual, click calibration and move all of your sticks and 2 switches around so that the endpoints are shown (you will need to setup 6 channels, all default, for your Transmitter). At this point, channel order does not matter. 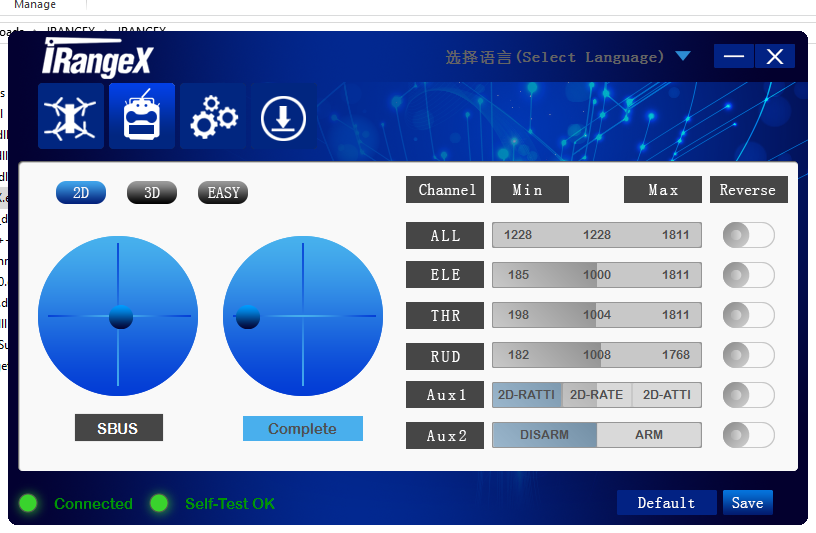 With calibration done you can then move the sticks again to validate the 3 sticks center halfway.

How-To on the Sim

Now, I really only fly the FPV Event simulator software as I think it is the most realistic out of them all. In order to get this working you need to go to the Controller option and hover over the Taranis. 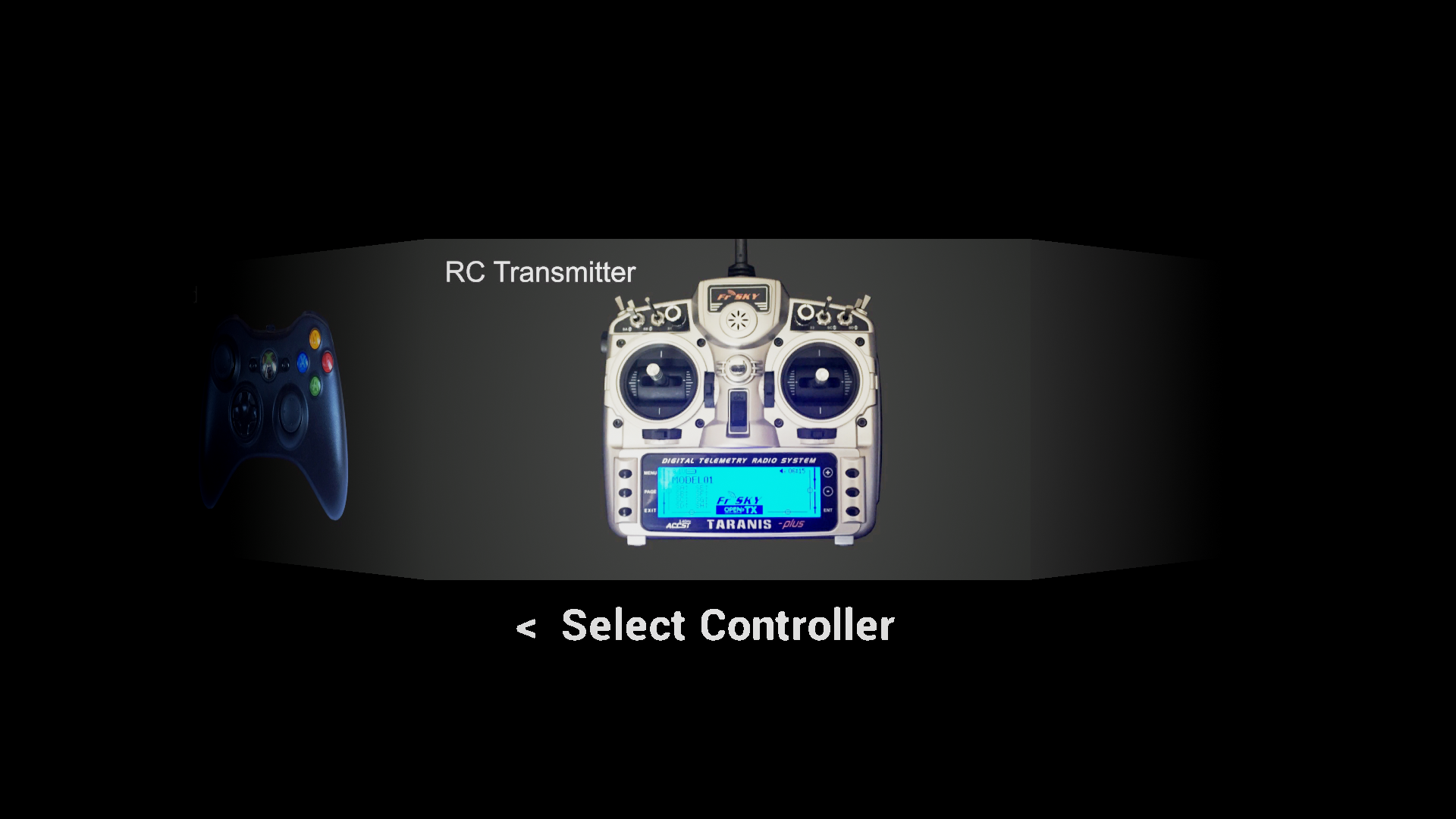 While in the menu, press C to access another hidden menu that will allow you to use a USB device as your input. 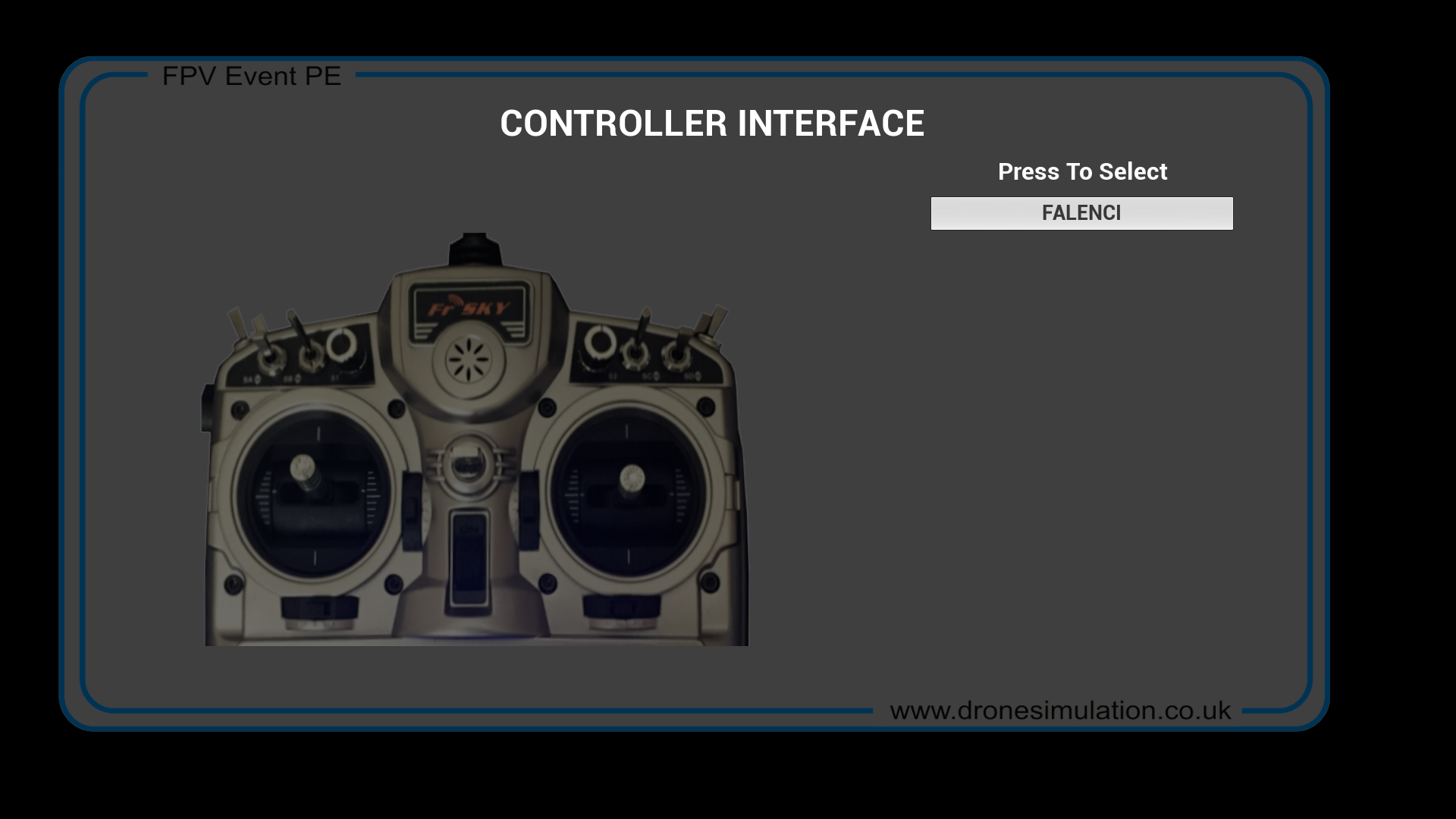 Click the appropriate USB device (mine shows up as Falenci, yours may too), you then get into another menu that allows you to configure the channels and also channel order. Don't forget to move your sticks around here before clicking Calibrate to make sure that they move around as you'd expect. Order is not important, just that they all move. 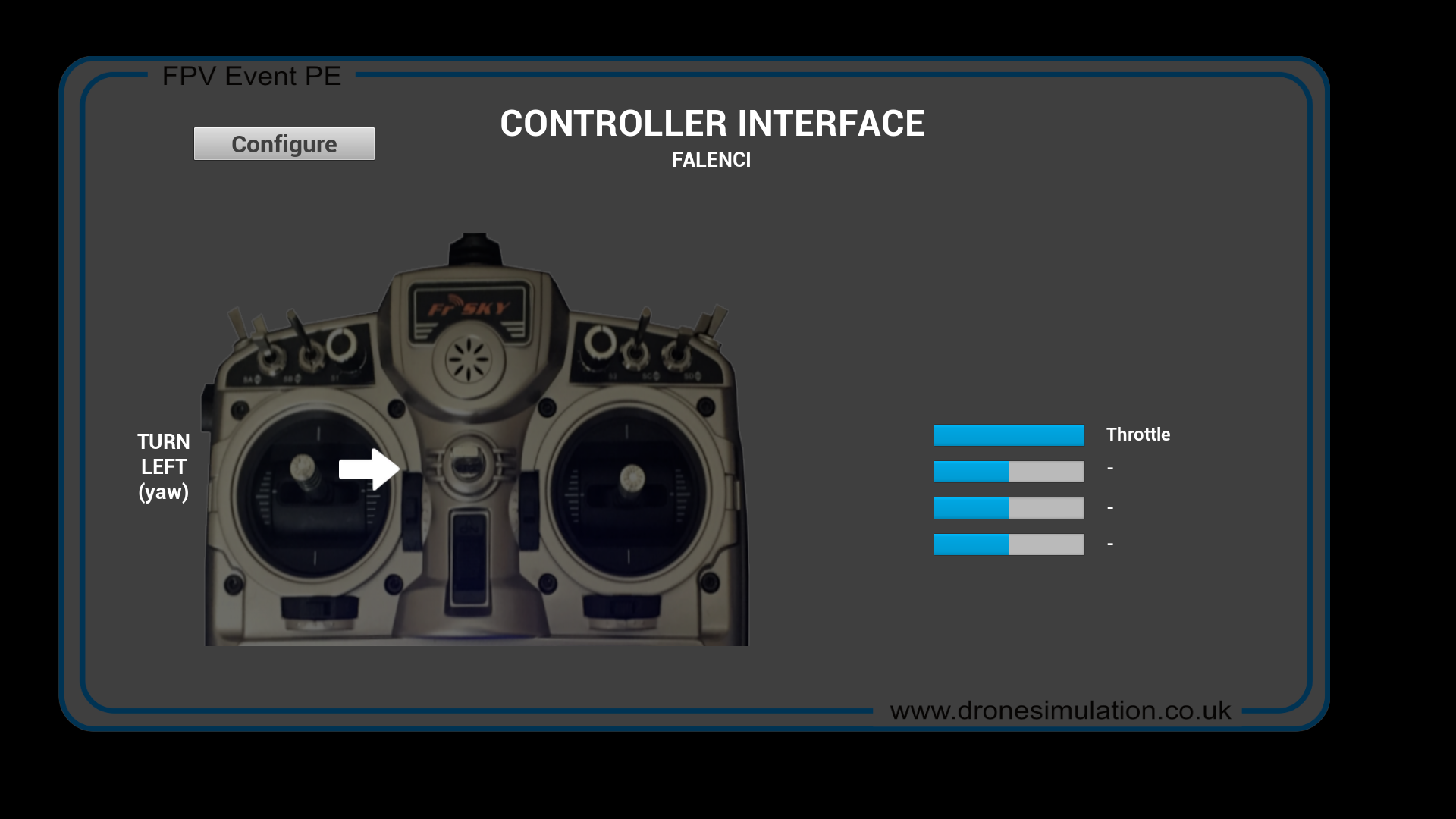 After clicking Configure you will be instructed to move the stick at full weight in a direction to indicate which channel is which. 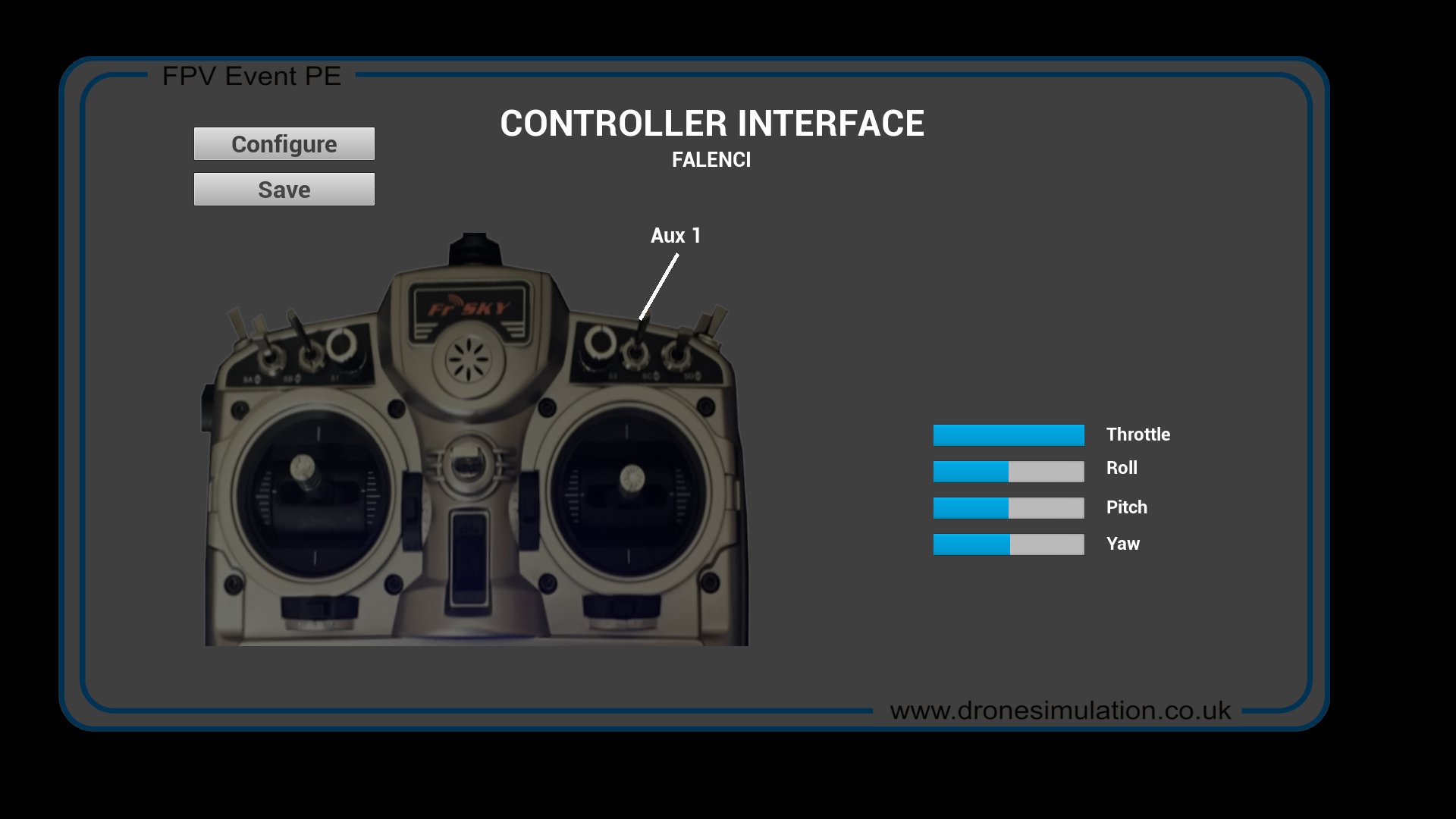 With that done you can now fly! I haven't noticed any lag by using it, and it just works! For me it's great as now I can sit how I normally would when flying in the field without risk of breaking the USB port or having it be uncomfortable.

Once again, the links for the dongle are available here:

edit: It appears for some reason the links are not working all the time, rather than pressing F5, just go to the address bar and press enter - then it works. It looks to be an issue with the Banggood website!