First off I'd like to thank 65Drones for sending out this product, I appreciate their support in my blogs' ongoing adventures for product reviews :)

So, the product! It's a Cicada 30A 4-in-1 board that runs on BLHeli_S (BB2 chip), and will take a 2-6S lipo! The exciting bit for me is that this will run 5s or 6s, a perfect ESC to test some super crazy speeds down the line :) I was hoping to test it on this quad but you'll see why I haven't as we get further down!

Currently sat at around $60 USD it's a cheap entry point for an ESC that is useful for saving space, weight, and getting those all-important clean builds ready to freestyle/race or anything else that we love doing with quads! 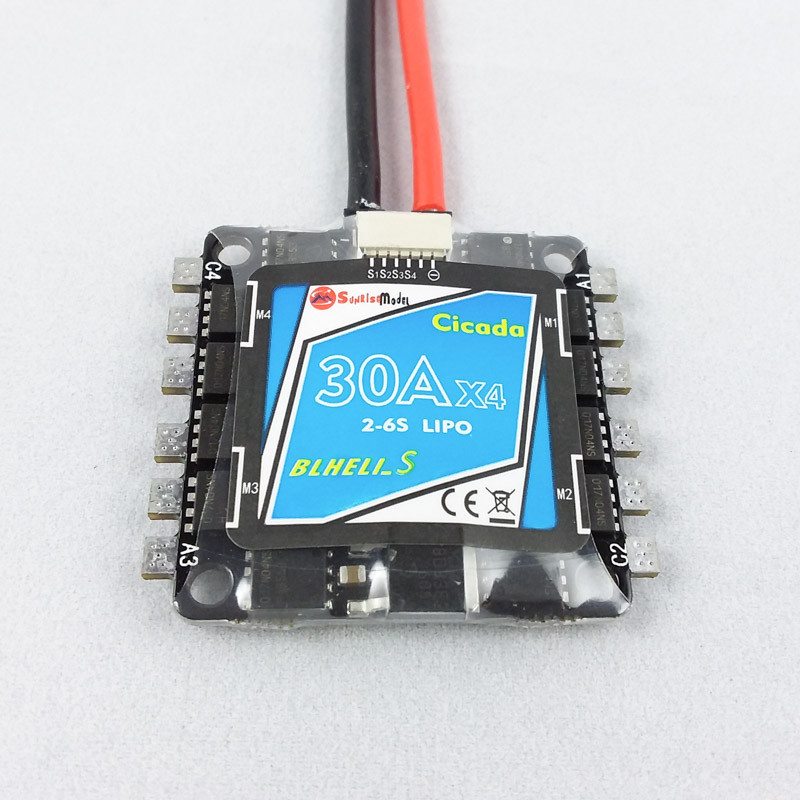 We can see it has the usual 30.5mm mounting hole pattern, meaning we will be able to mount it above or below our flight controllers. It's a little larger than a normal flight controller with the solder tabs sticking out slightly, but this should not affect even the smallest true X builds that run their prop line extremely close to the center stack!

This build is a bit of a special one for me, I was approached by a very kind gentleman in Ibiza who is developing his own in-house frame. Based in Italy, he is hand-laying the carbon, and has created a unique but crazy lightweight frame, particularly aimed at racing. Feeling the strength and weight out there, I knew this HAD to be the frame to put it in. 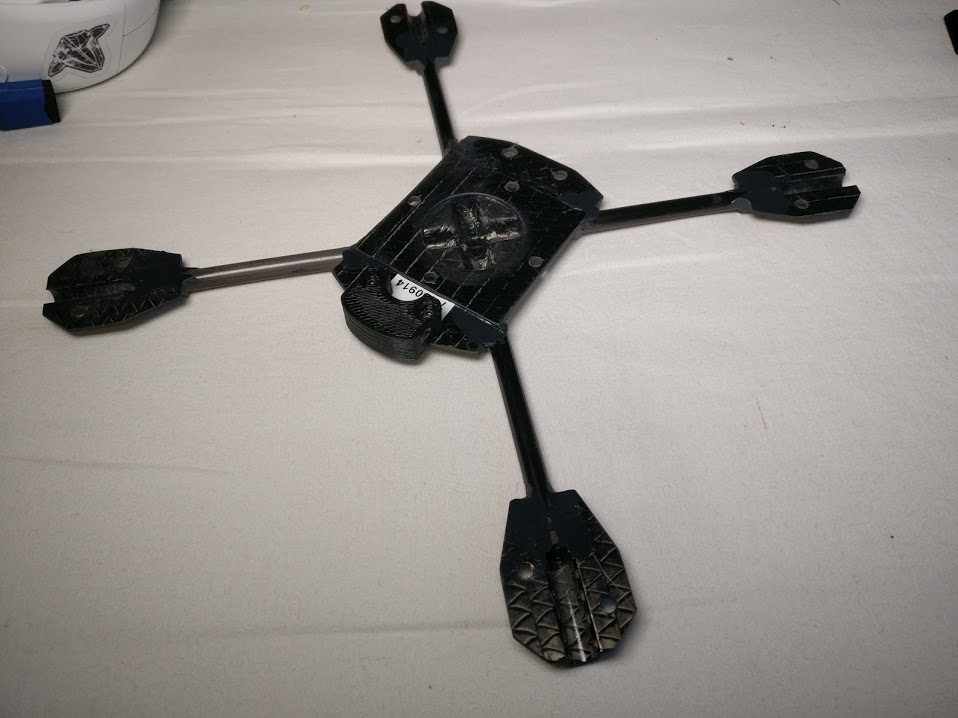 Aside from a wicked speed controller package and frame, here's what else we'll be using in this build: 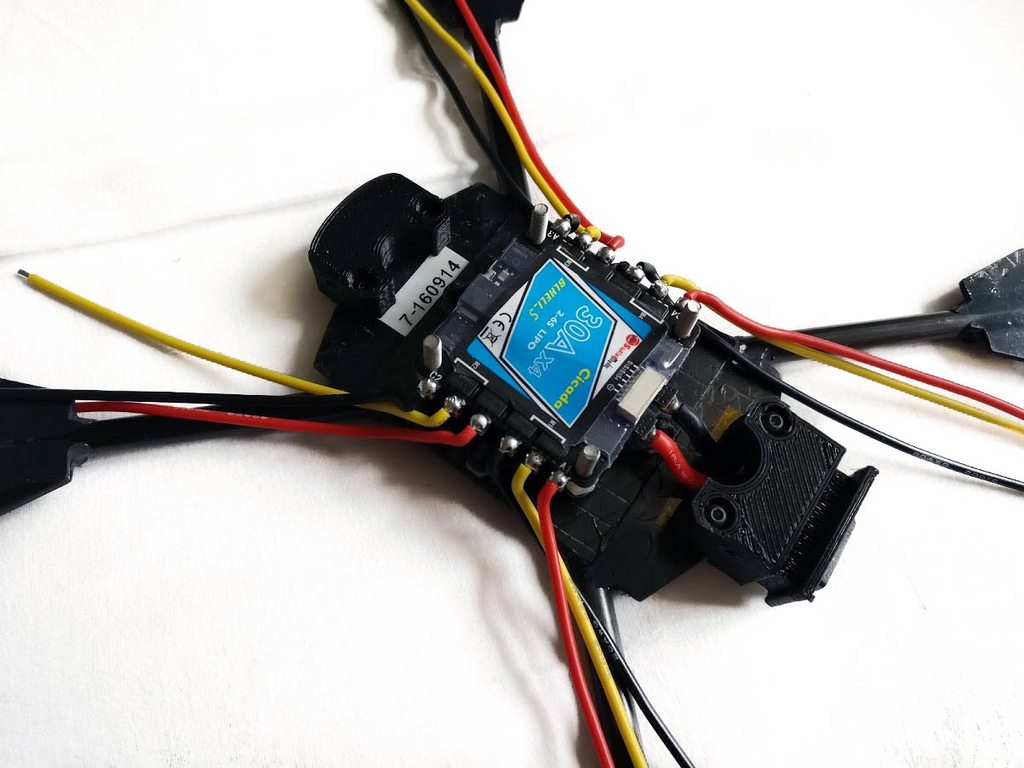 First things first we can install the ESC's onto the frame. You'll notice the power cables towards the lower portion of the picture which contains the XT60 that sits just out the back. The only annoying part of this ESC package is the lack of BEC. We have no 5v or 12v outputs from the ESC at all, meaning that we will have to solder some more wires onto it. I know why, it's because the 6s capabilities mean you need to spec some very specific regulators which are probably not possible with the available space left on the board. 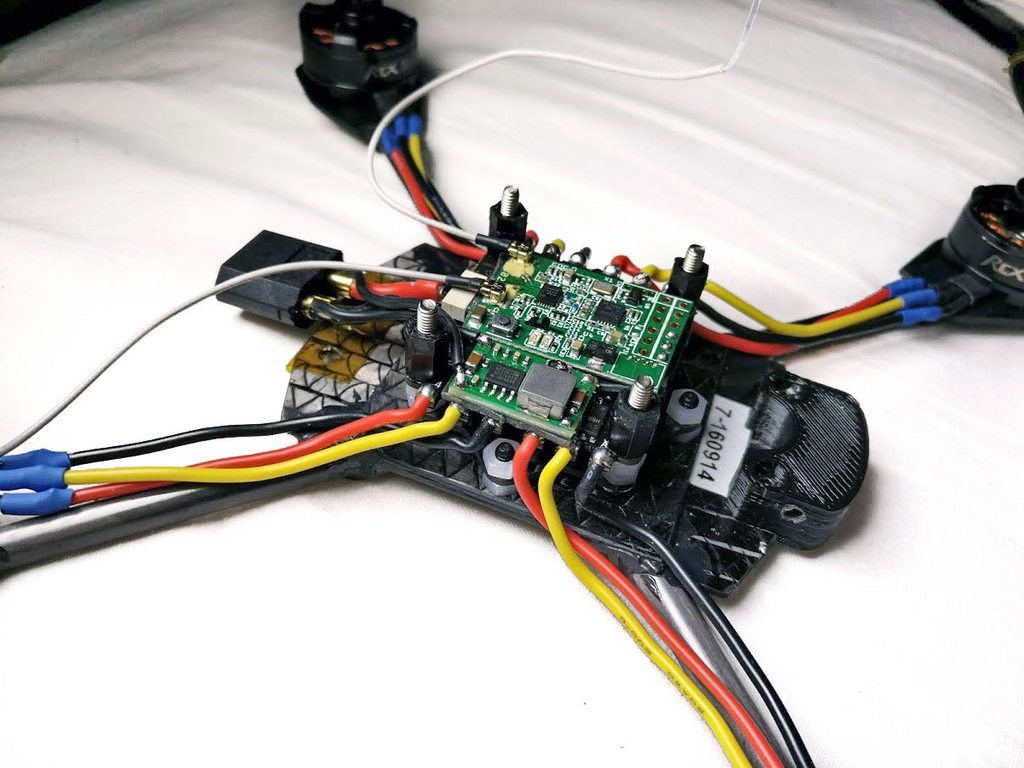 Next up we are adding the regulator, the good old DSUN - it's a fantastic regulator with a pot that allows you to select any voltage you require, from VIN (input voltage) down to around 4 volts. We'll be using 5 volts for this to power the flight controller. I've packed the receiver in the same space as the height of the DSUN means we'll have to raise up the flight controller slightly anyway, so we may as well put it in the same space to make use of it properly. 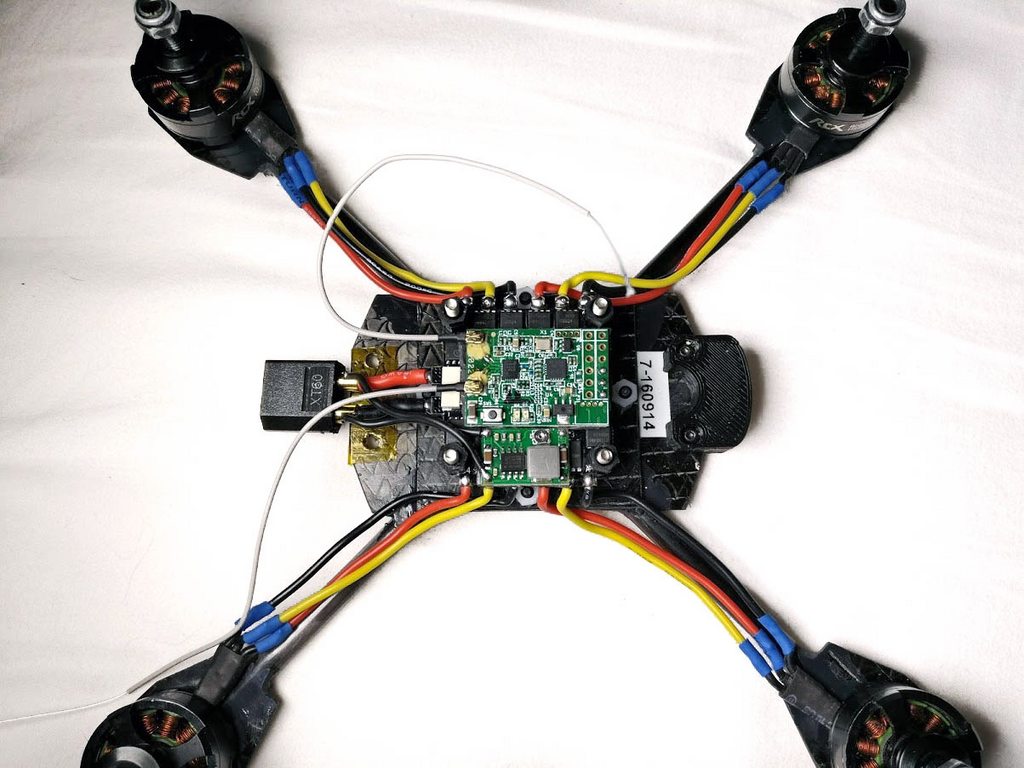 Next up we've soldered up the RCX motors ready. The reason I've chose these motors is that they still put out a decent amount of power (not as much as some of the newer motors), but they are also super lightweight - and that is exactly what we're going for in this build! 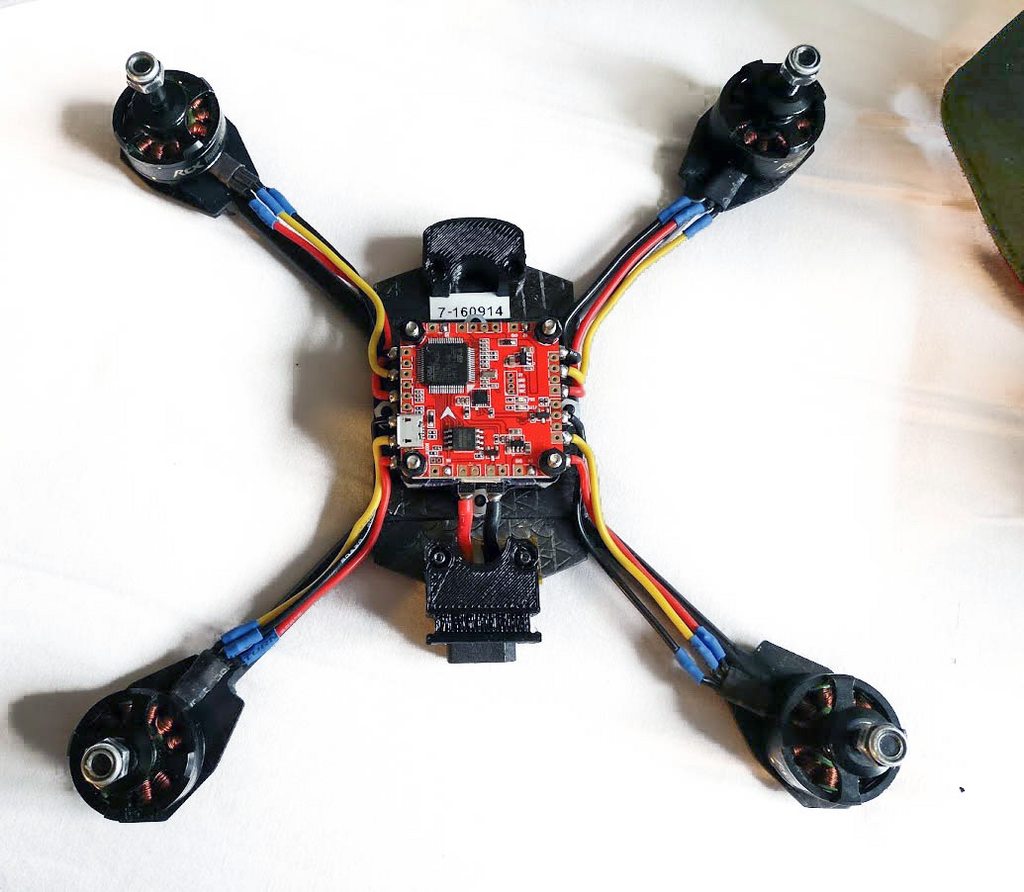 Once we have done that, it's time for the flight controller! This is easy enough to add, just on top of the stack, the final piece in this puzzle. 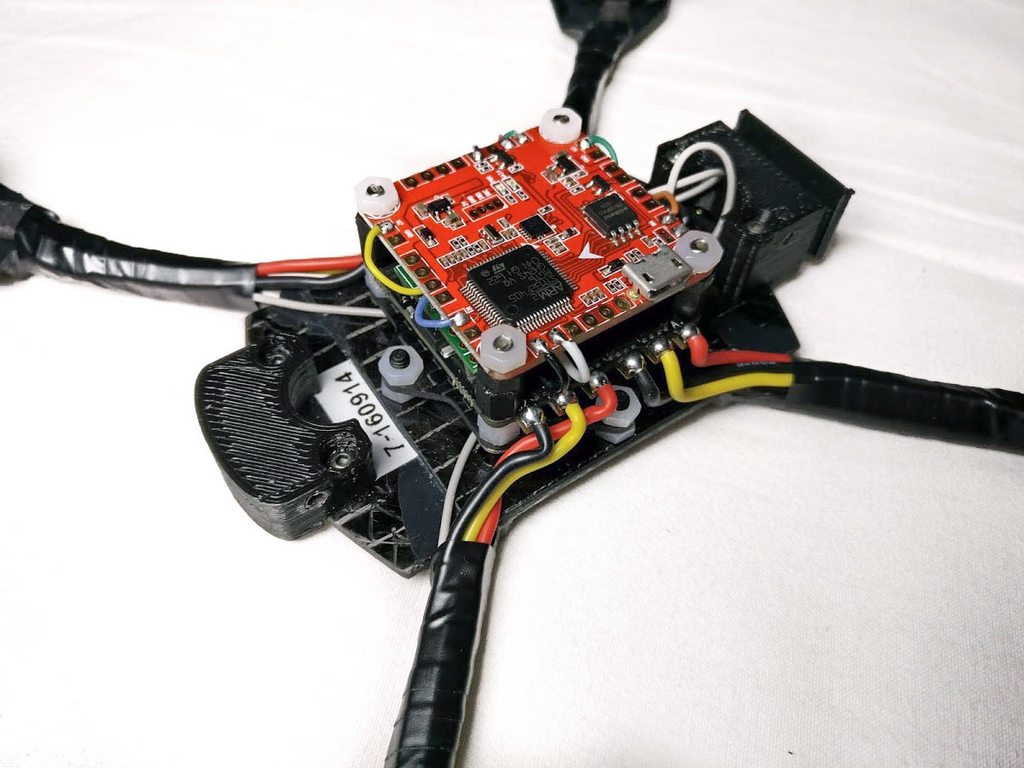 If we were sticking to line of sight flying, this would be the whole stack - tiny! You can see how thin the arms are on this build, it would not be practical to run ESC's on the arms, as it is designed to be as aerodynamic as possible. 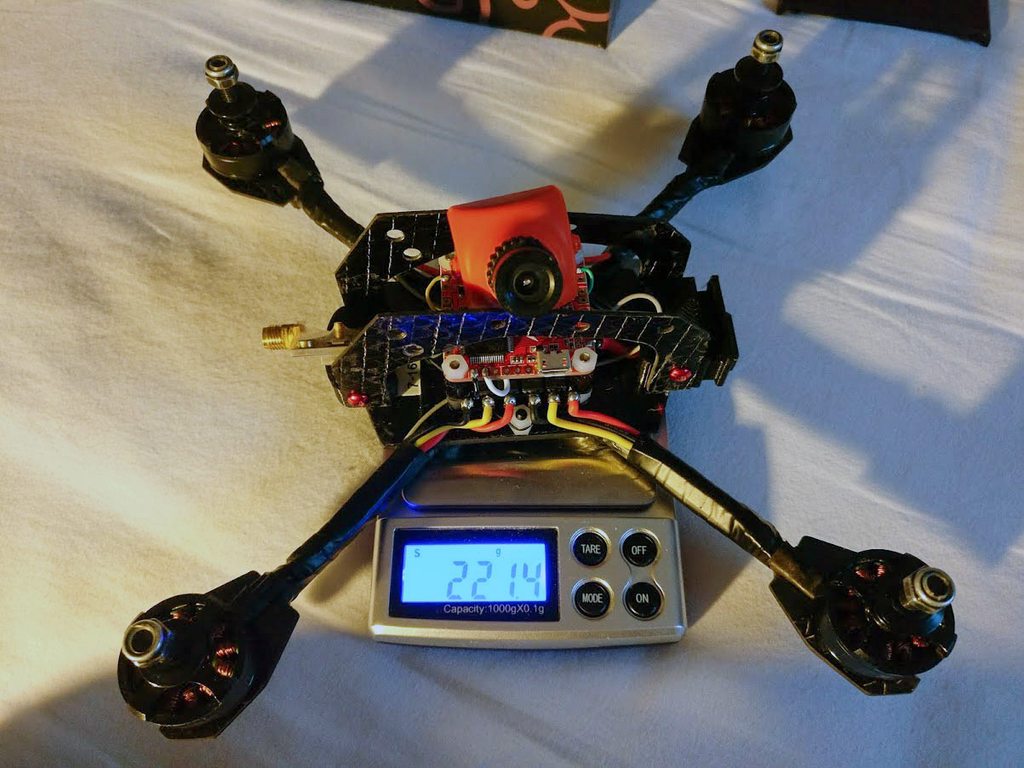 With that in mind, I've added the top section of the frame just roughly to gauge at how heavy (or light) this quadcopter is going to be. 221g for a full 5" setup (minus lipo) is just insane!! 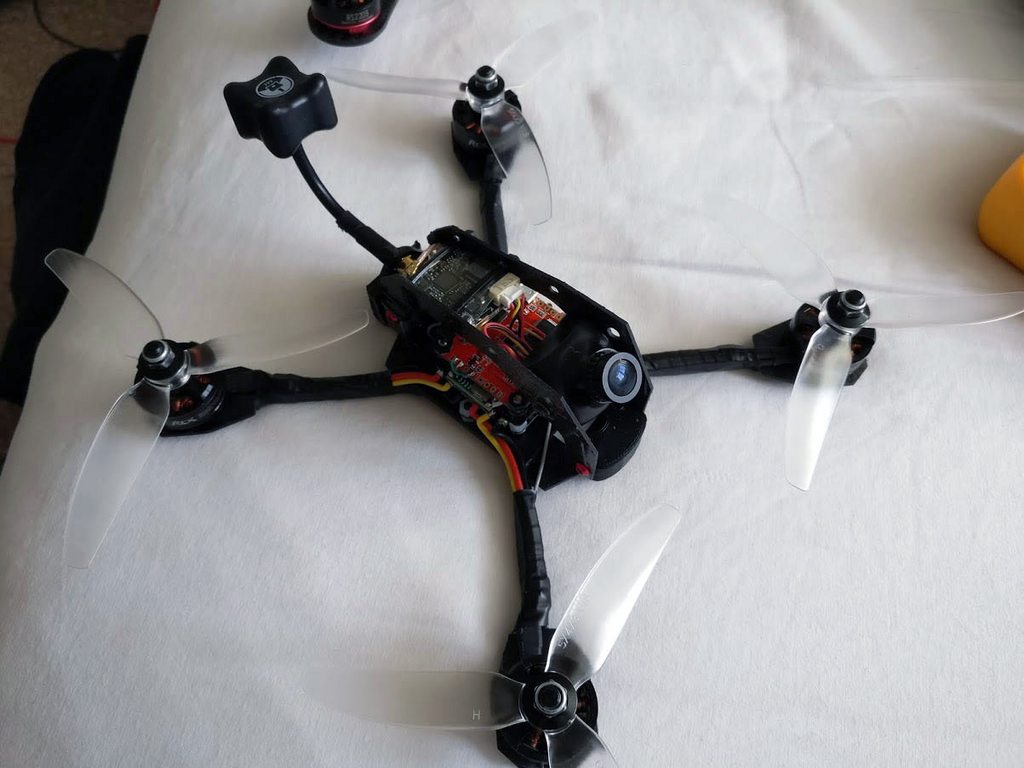 Hooking up the TBS Unify Pro HV to the XT60 also, we can then add in the FPV gear and finish the build. It looks like a very light setup that should work great; it's super aerodynamic and has saved weight in all the right places. Many would question the strength of the arms, but I did the "bend" test out in Ibiza, and it was safe to say I couldn't even budge it. 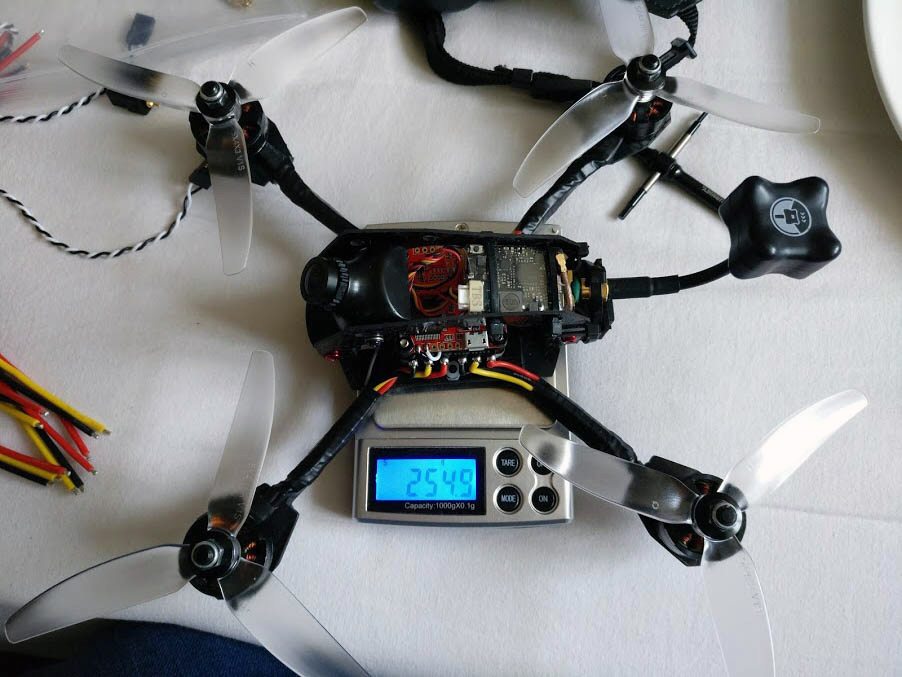 With everything now on, we can produce a final weight, included are propellers. This is a very light build, shaving some 60-80 grams off of a normal race build that I fly. That is a substantial amount of weight that will totally change how it flies.

Because these ESC's run BLHeli_S we simply update them through BLHeliSuite as we normally would (I have done this on another flight controller as it's easier than on the Revolt). It's a simple and painless process to ensure we're getting the maximum from this setup. The bonus with BLHeli_S is we get Multishot out of the box, as well as super low idle and great throttle range due to the hardware PWM and other nice features of the BB2 CPU compared to SiLabs or even Atmel ESC's.

This video covers the first flight, to sadly my last flight. The good news is the ESC was not damaged even remotely in the last flight, so it continues to live on and we'll be putting it into another build, hopefully with some more 6S emphasis so stay to tuned for that :)

Sadly the only footage is DVR because it is a lightweight build, so apologies for that. However, I'm sure it is adequate in portraying what we need to here :) 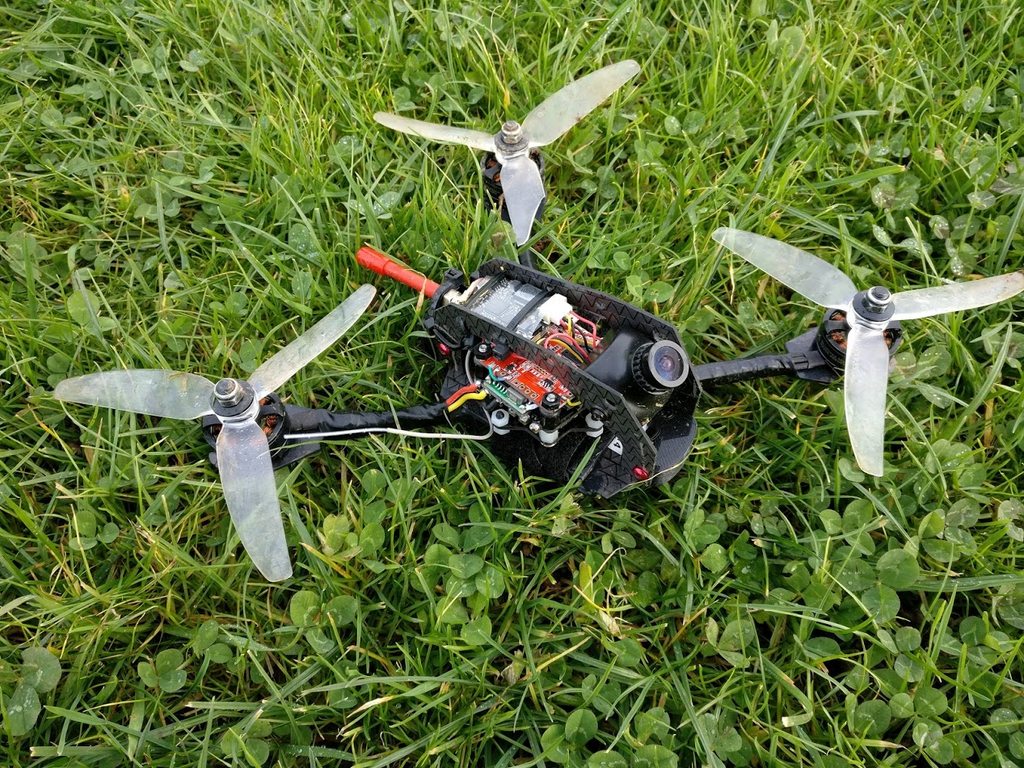 Aside from the fatal crash (to be fair to the frame it was a full throttle crash into solid wood), what can I say about the ESC? It does it's job in saving weight, makes for a very tidy build but has it's own annoyances such as not having any regulator at all, despite having a red cable coming out of the connector that plugs into it.

If you are looking for a new speed controller that makes your build clean and light, but also has the latest tech then you need look no further. Long-gone are the days of reliability issues with running multiple components on the same stack. I've got Cicada ESC's currently in ALL of my quad builds, and have had really no issues compared to the other ESC's I've used in the past. 65 Drones have the ESC available here for Worldwide shipping!