I saw on Facebook that a new company were looking for people to review one of the newer Tiny Whoop cameras that has entered the market recently. Rebranded under ARRIS, the EF-01 FPV Camera is priced around 33% cheaper than the very much standardized FX797-T (depending where you get it from). It also boasts (from the product description) using less power, having a better picture quality, wider Field of View, and also allows the ability to switch between PAL and NTSC.

I have been meaning to try out other Whoop alternatives that come in at cheaper prices (such as the Eachine clone frame on Banggood - one is on the way.. :) ) - so what better way to do it than via a review! :) So let's get on with it and see what the product specs say.

The advantage of ARRIS being stockists on Amazon, and using their Warehouses, means that firstly I don't need to wait the 2 weeks required like I would at Banggood with other cameras. I get next day delivery, even on Sundays! 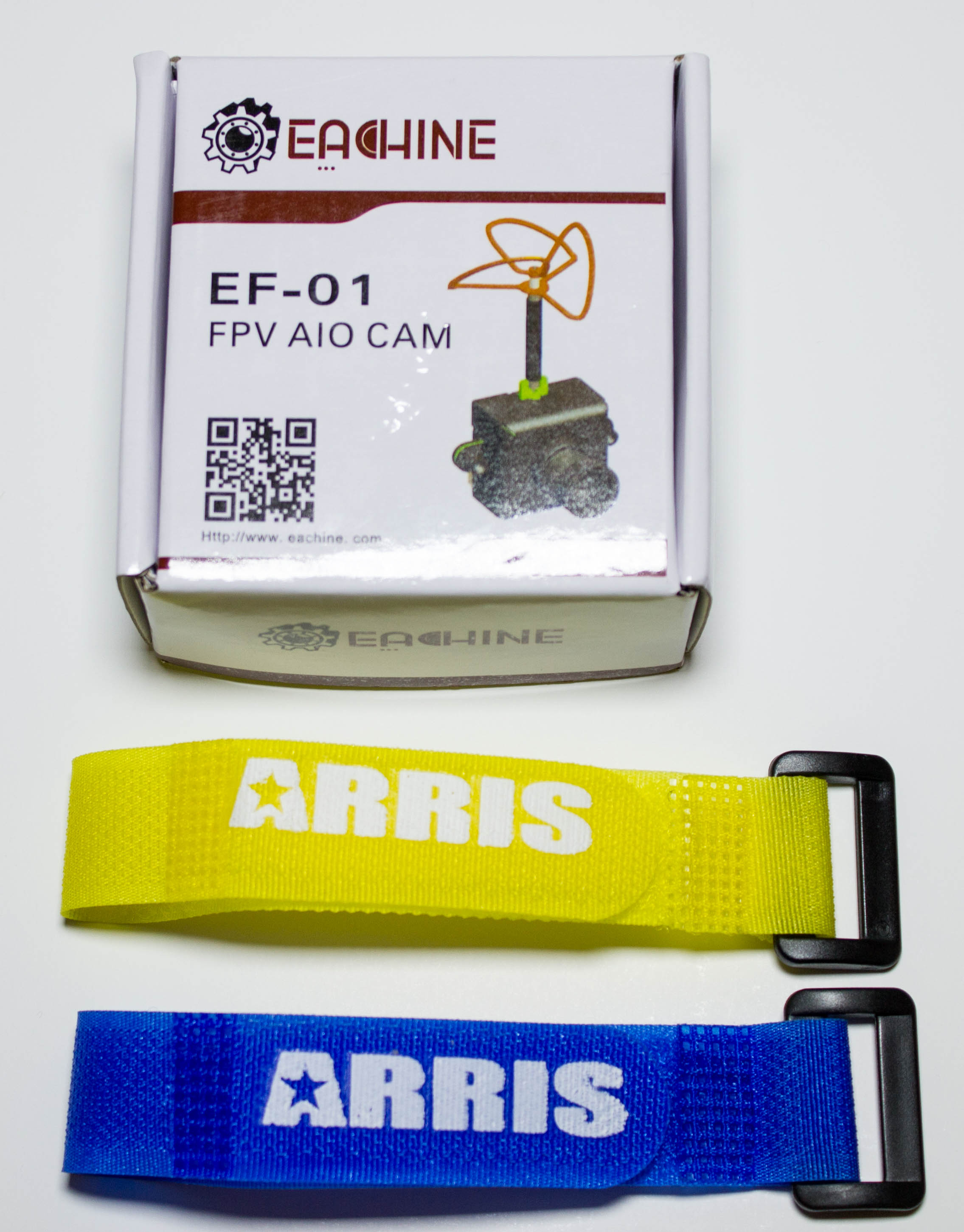 In the packaging we have the camera itself which is notably not rebranded whatsoever, as well as a couple of battery straps which is a nice touch. 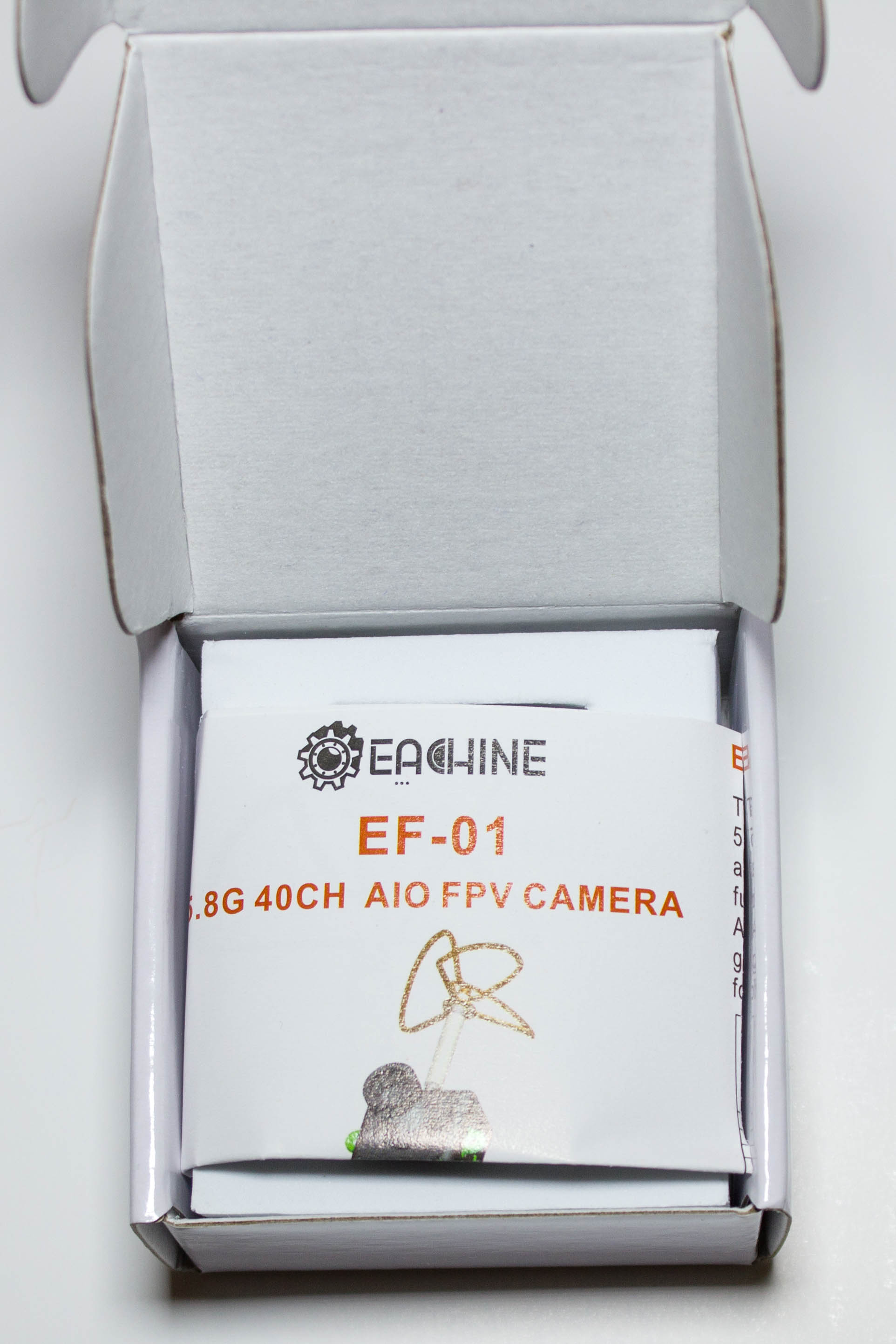 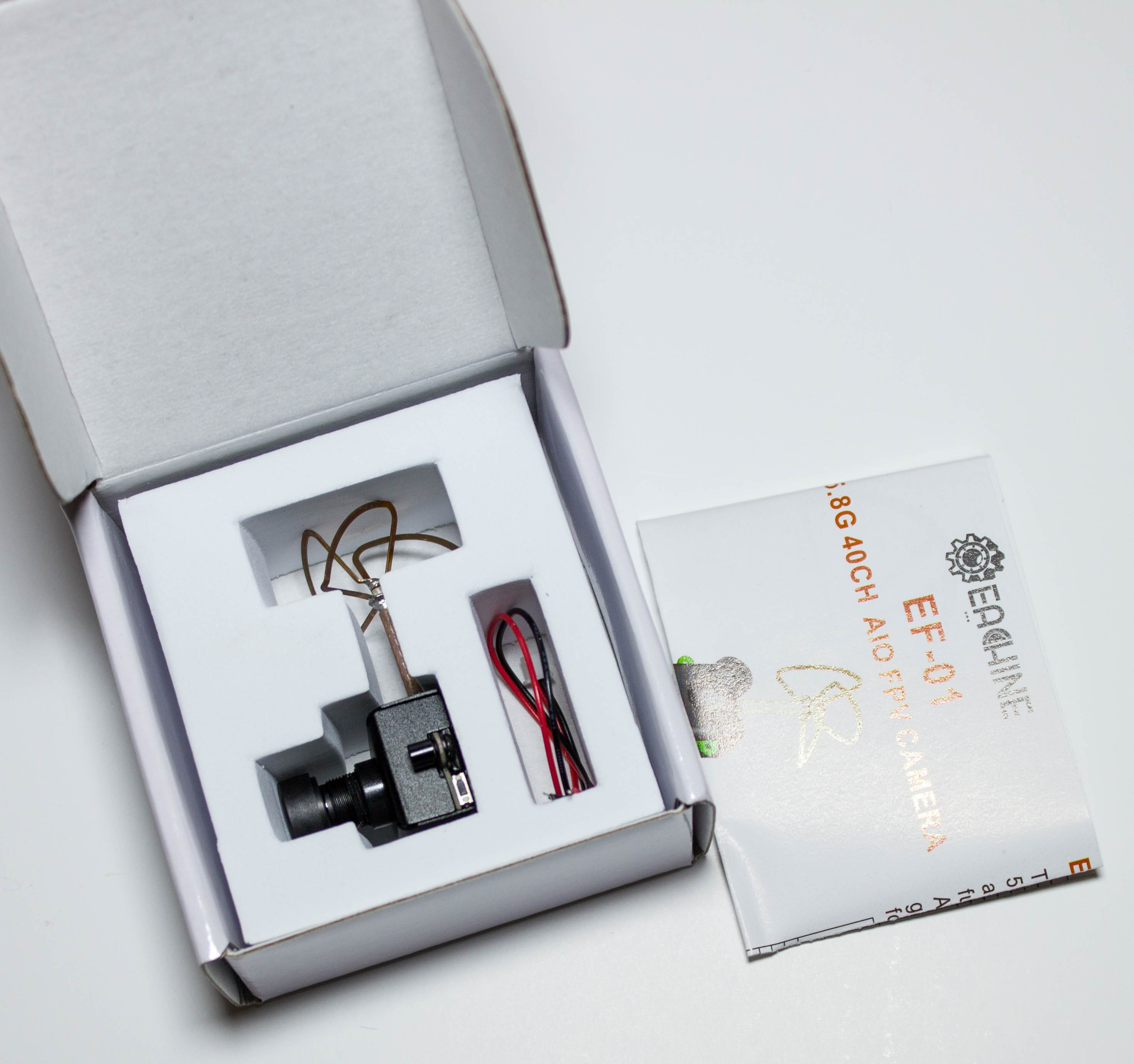 Inside the box we get some great packaging with a couple of slots for the all-important items - the camera and the power lead! I like the fact that the camera itself has a connector for the power rather than just having direct soldered wires. My current FX797T has direct wires which make transferring it around different vehicles a bit of a pain. 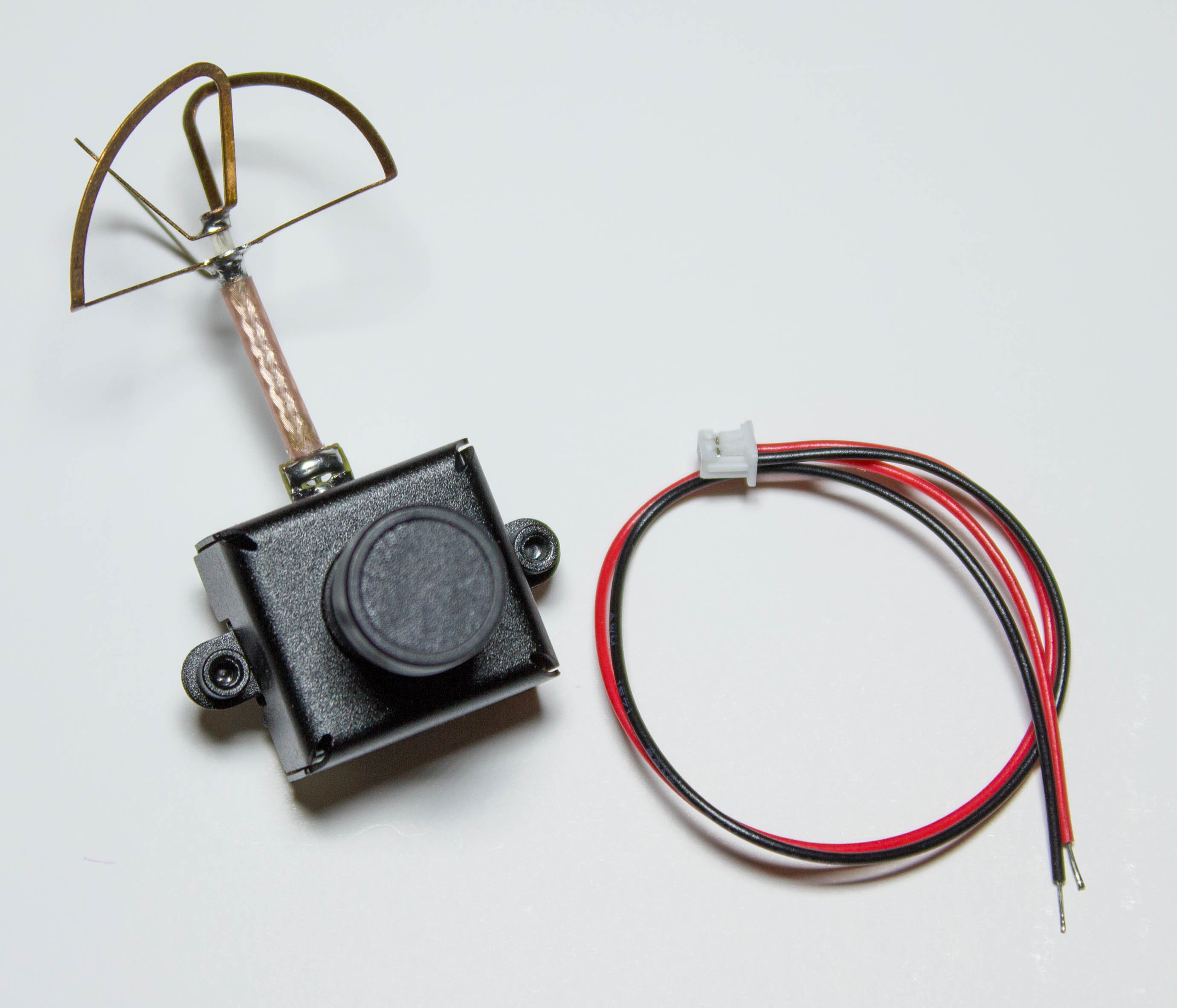 Outside of the box we have a very normal looking All-In-One FPV solution with a longer than normal coax for the antenna which also makes it more bendy than it's FX798T rival. This will also add a little bit more weight so there's positives and negatives to be had depending how you fly and what you plan to put it on. 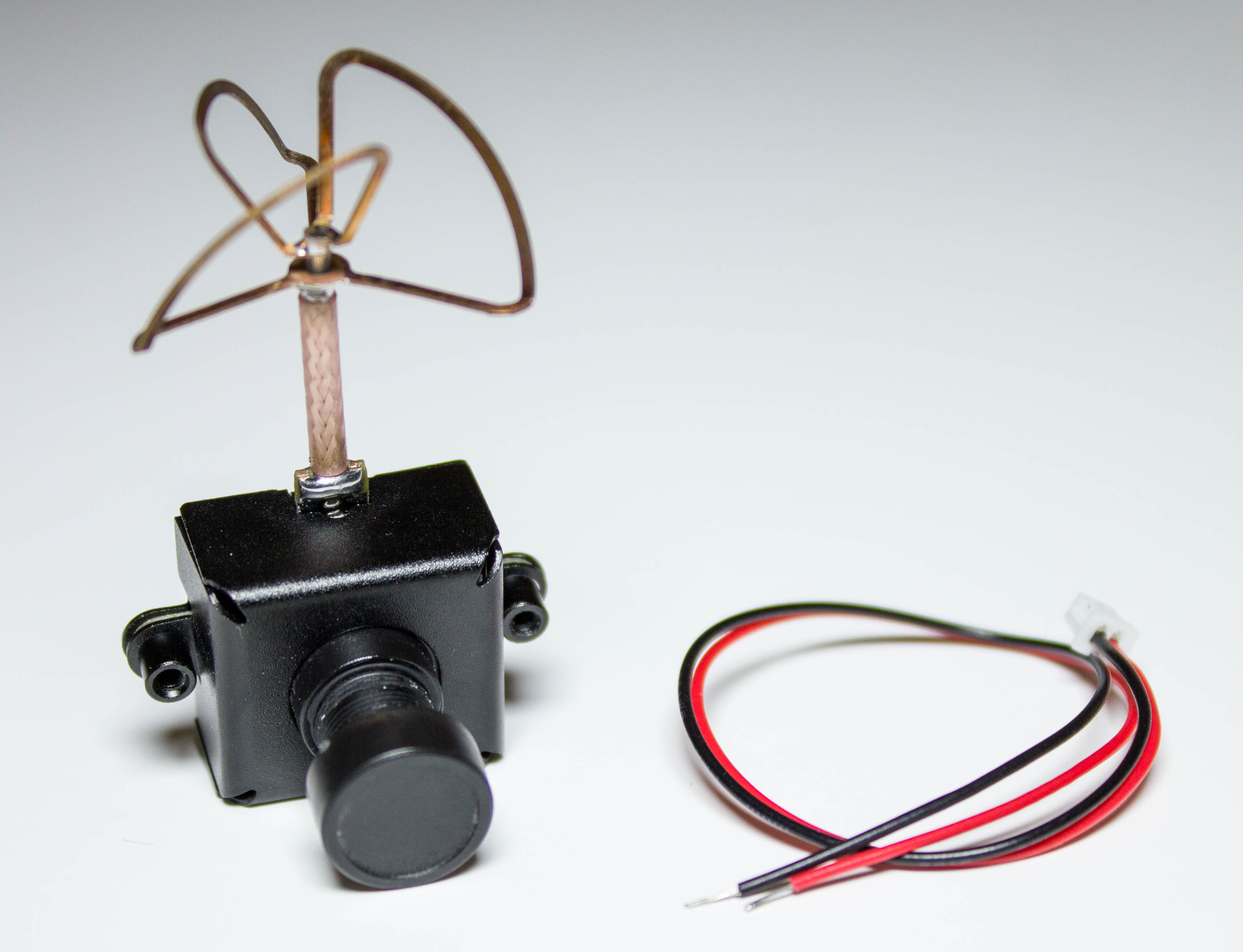 We can see the camera comes as standard in a pretty heavy duty metal case. This can very easily be removed for weight saving for things such as a Tiny Whoop. If you are putting it on something else which is slightly bigger or even land based then the case would definitely help against any impacts or damage. 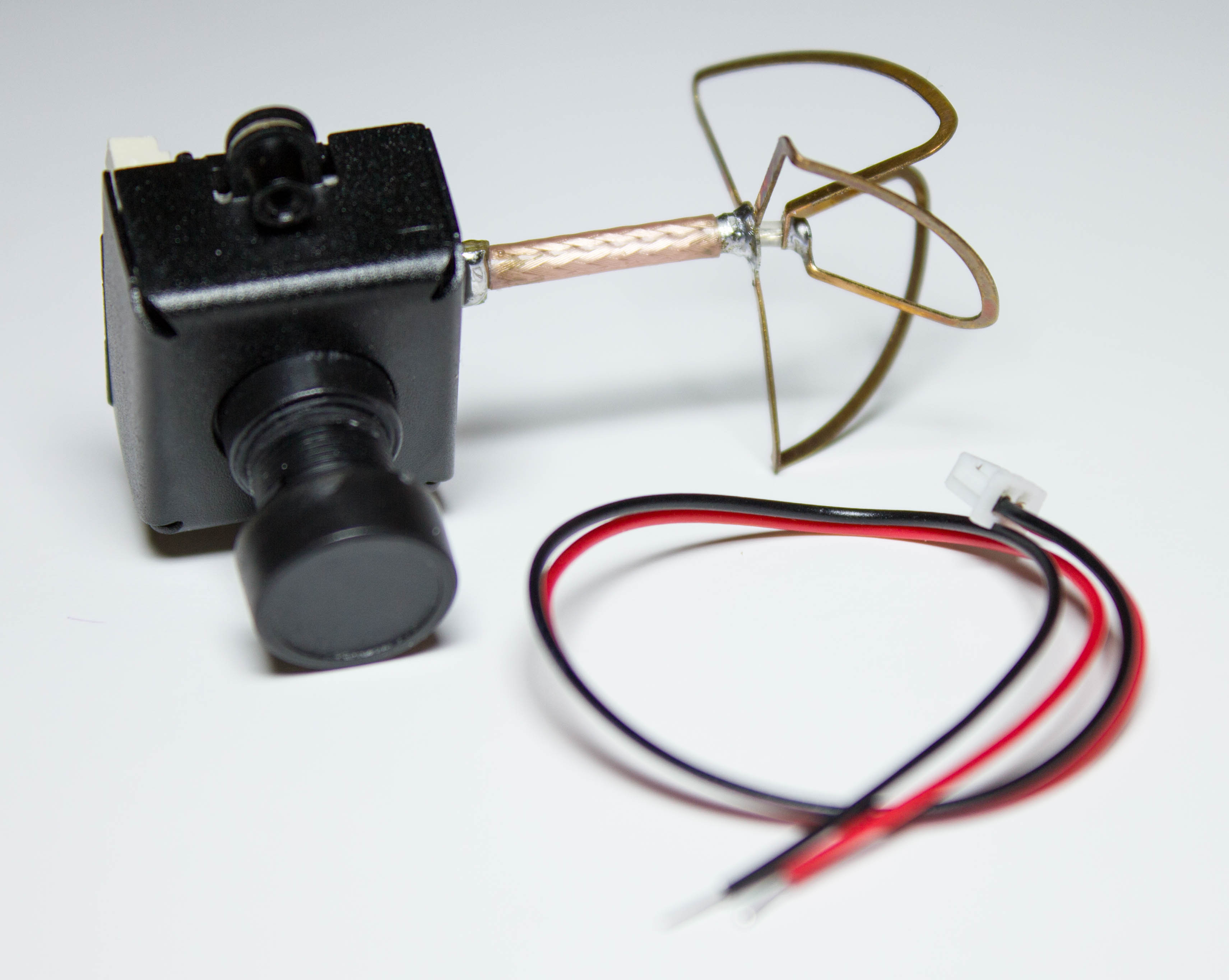 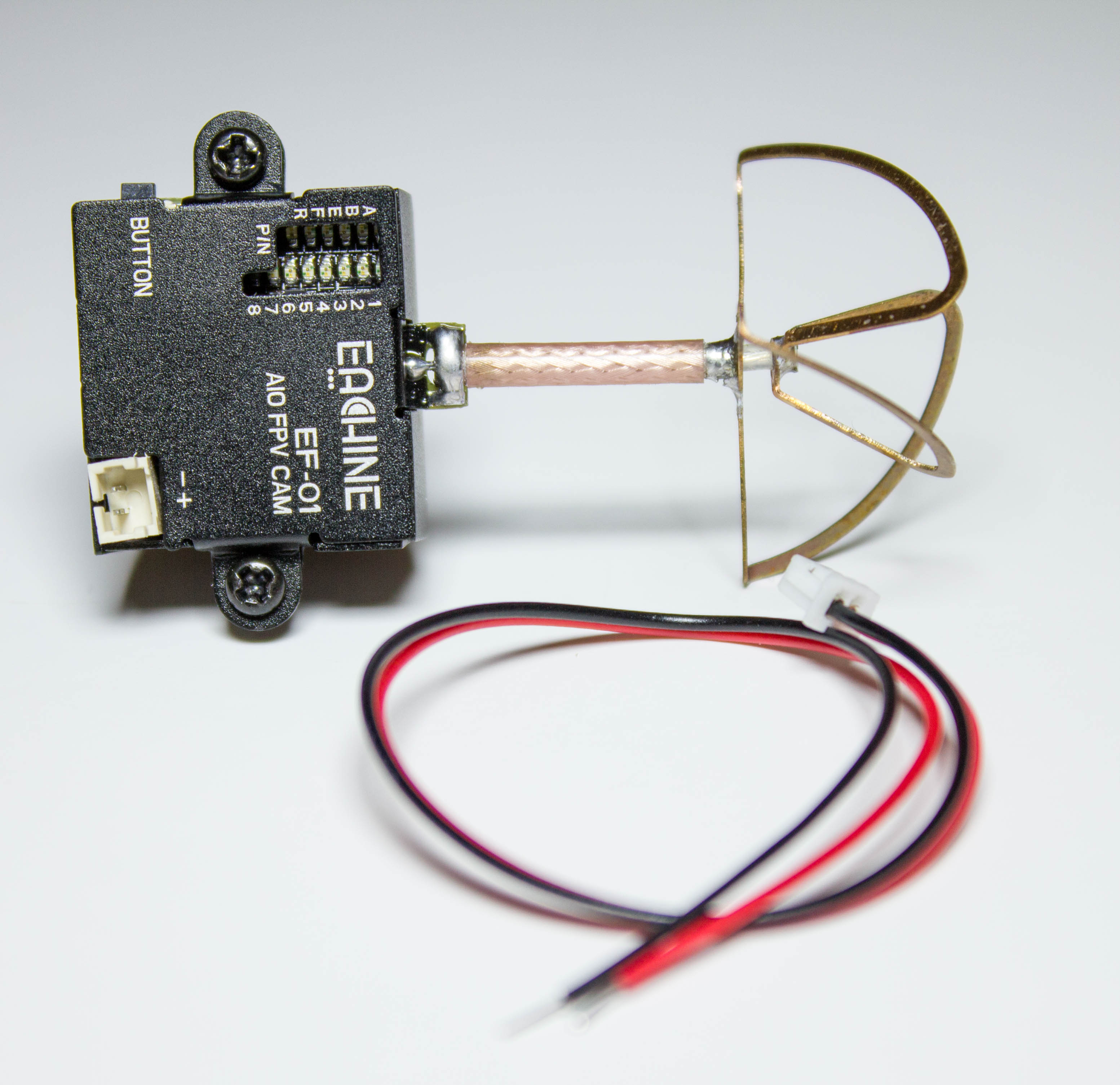 On the back we can see the standard connector for the camera as well as a nice cut out for the channel and band selection for the FPV side of things. You'll also notice if you have a keen eye that there are 5 bands listed on the camera (A,B,E,F,R), however there are 6 LED's! The last LED is specifically for the PAL/NTSC setting whereby ON indicates it is set to NTSC, and OFF is for PAL.

So as you can imagine the extra length of the coax on the antenna and the metal protective case all add weight (around 2.5 grams I'd probably estimate for both), so in order to run them on the Tiny Whoop we need to remove some of that. 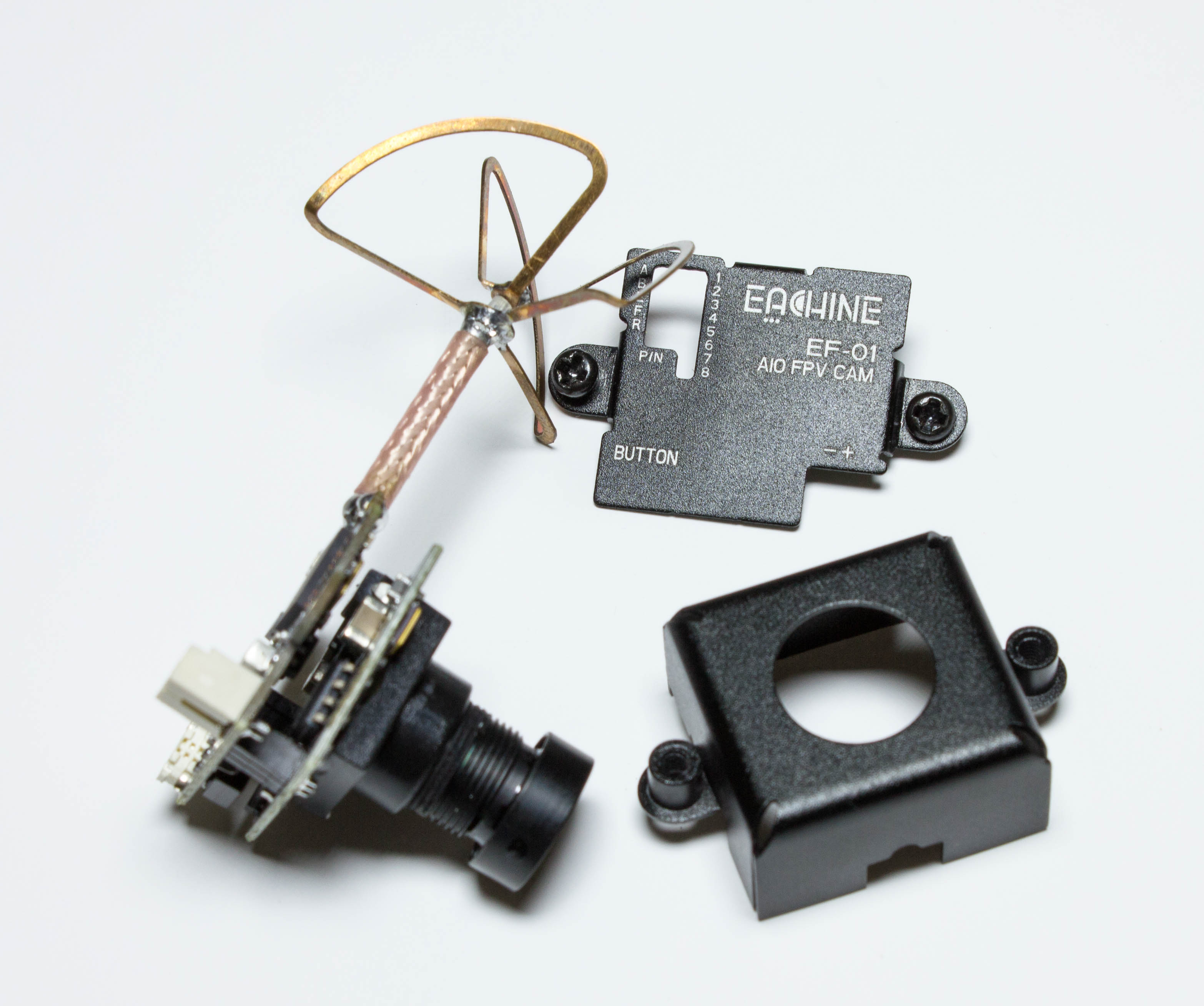 Removing the case is as simple as loosening the two screws on the sides, and the door pops off. With the lens cover removed from the lens the front of the case slides out the front without issue. 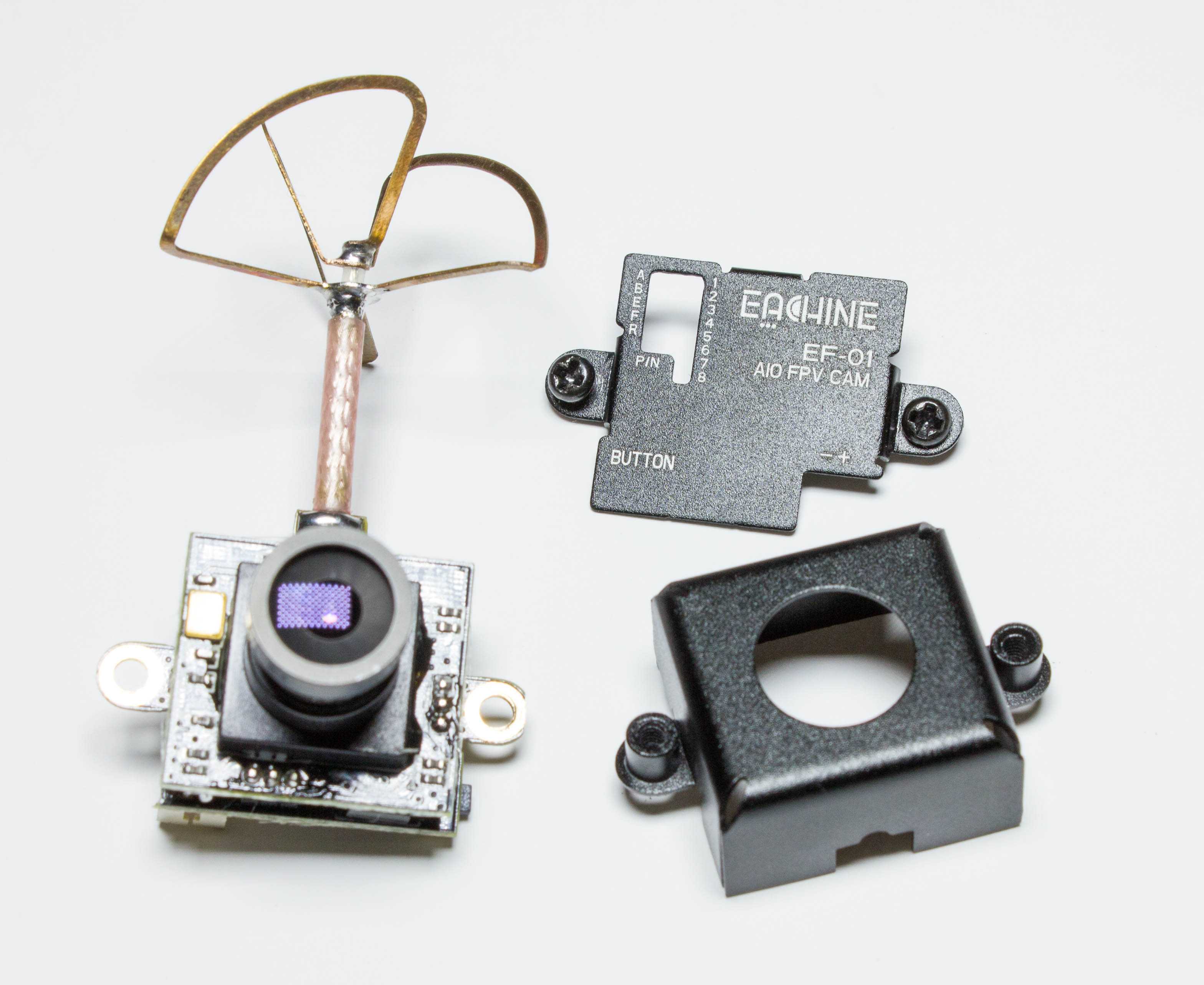 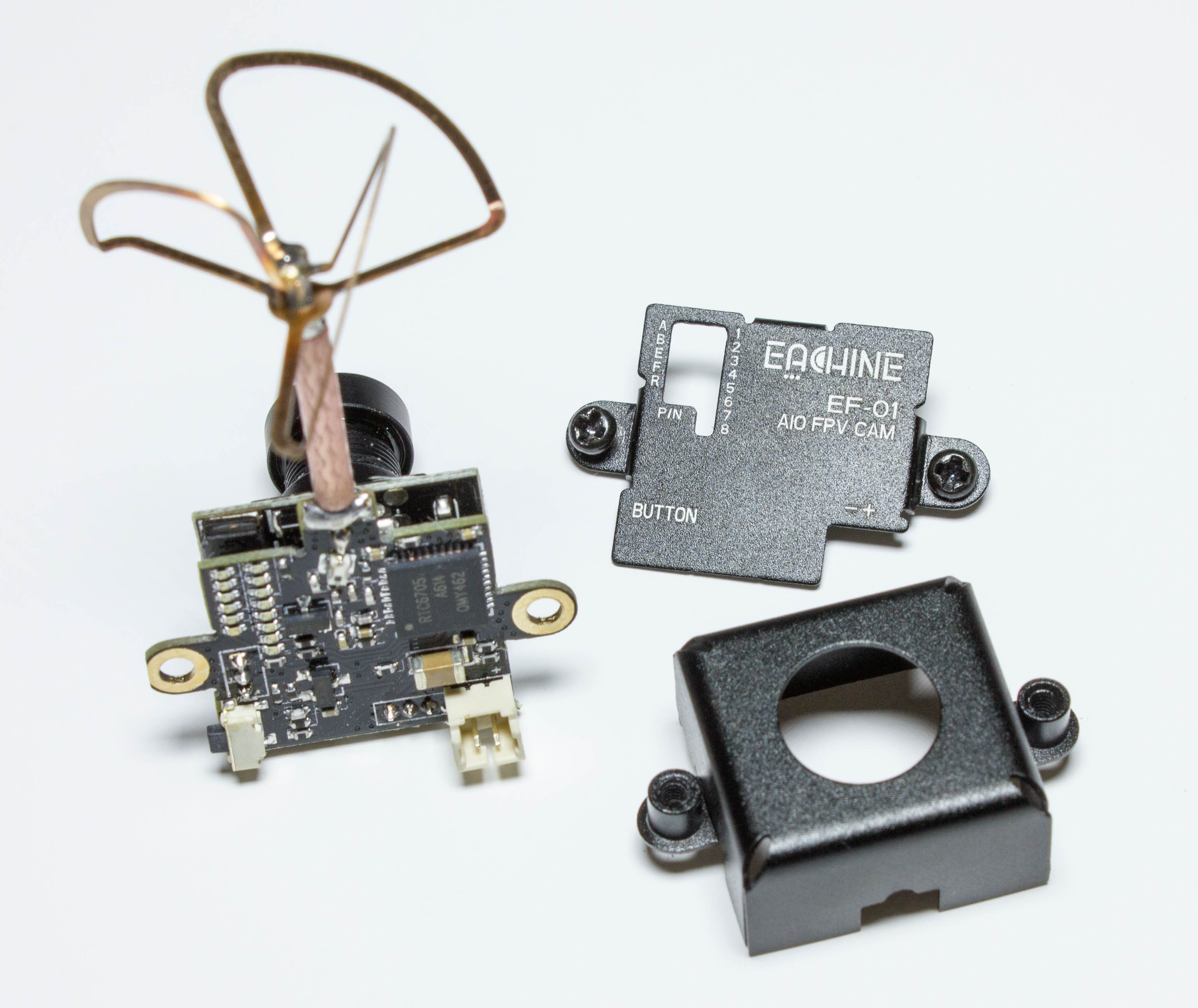 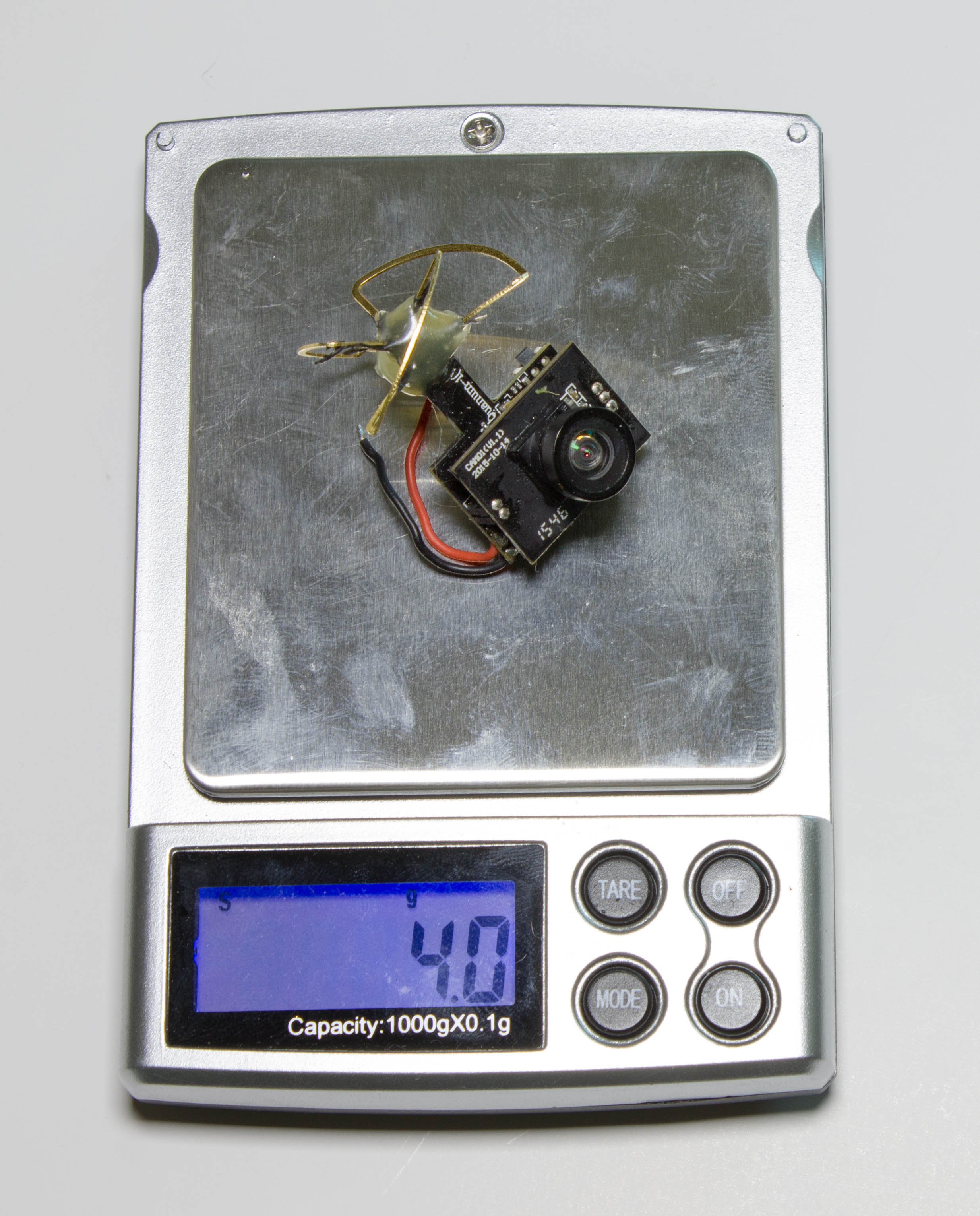 The FX797T weighs in at a mere 4 grams, it is going to be very difficult to beat this when the stock listed weight of the EF-01 is 8g. 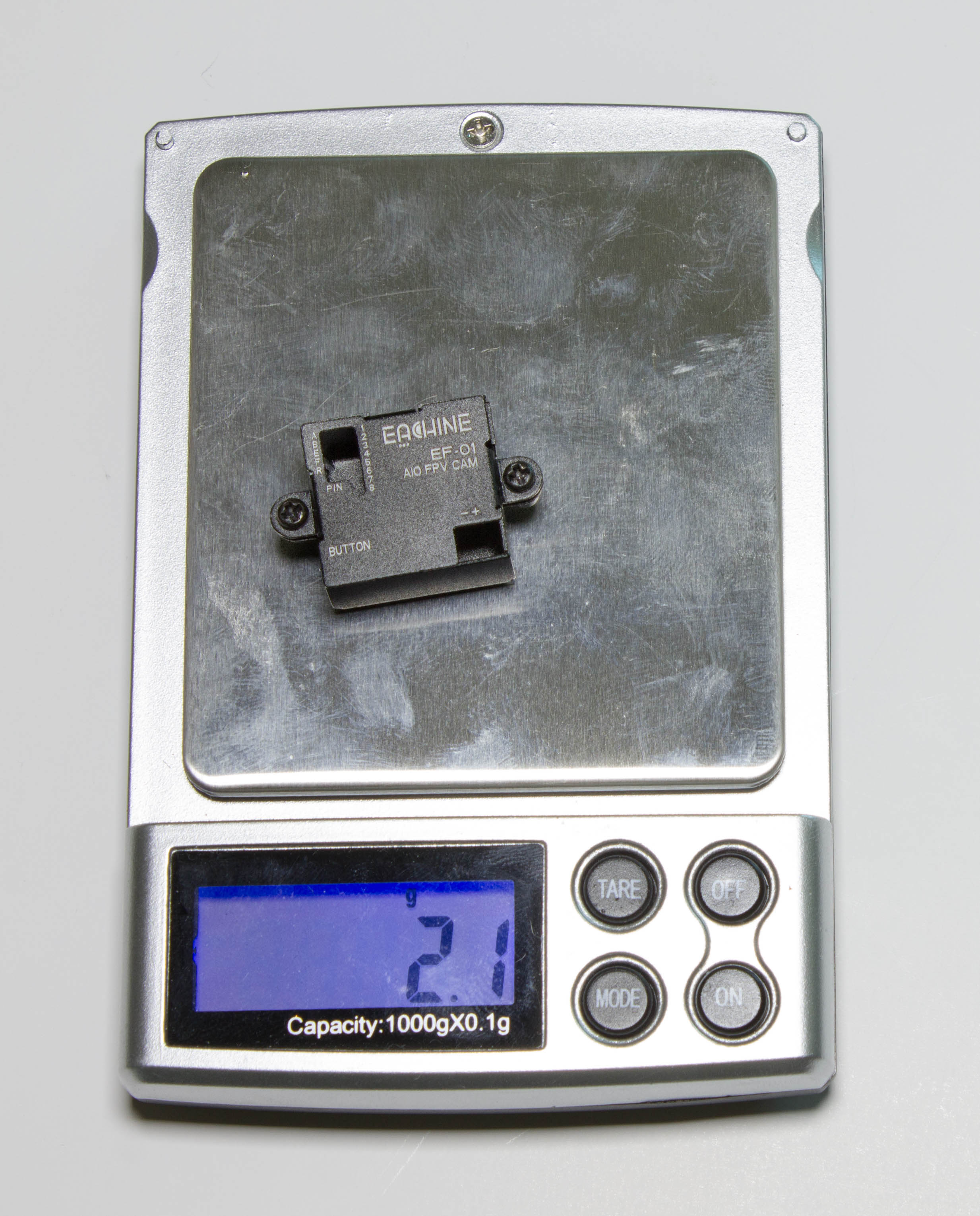 With the case removed we've saved a whole 2.1 grams from the camera, near 25% savings! I think if we moved the antenna, or even removed the coax and directly soldered we could probably shred another 1 or maybe even 2 grams from it. I'm not brave enough at this time to risk destroying it, but it's one for someone else (or me later on), to test! 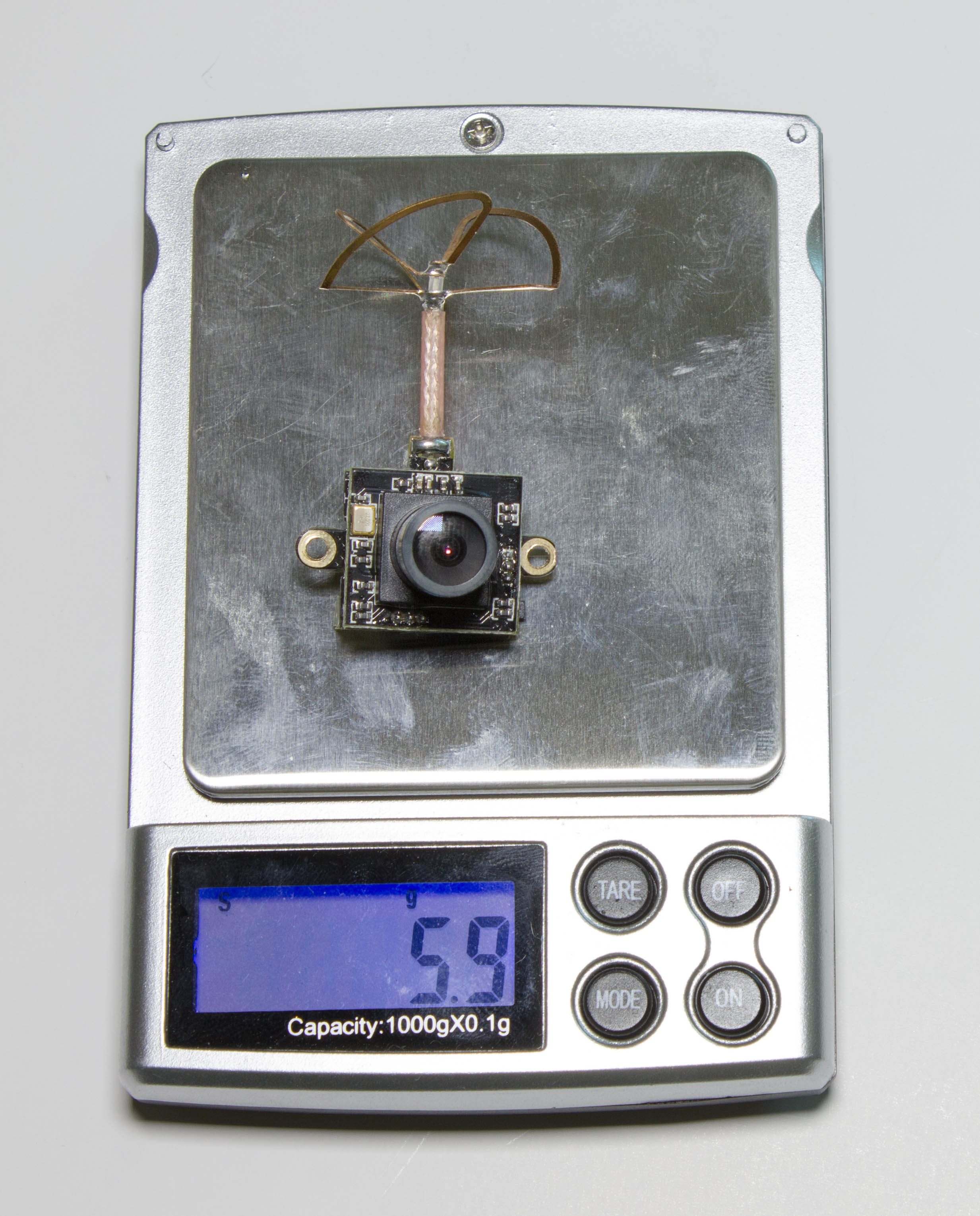 With the 2.1g removed from the 8g total, we can see that as to no surprise the final camera weight is at 5.9g. 1.9g above the FX797T so quite a large increase (near 50%), however testing flight characteristics will be key to see if we do get substantially less flight times than the other camera.

Aside from weight, there is also power consumption to consider when running these cameras. Running on a 1s 205mAh lipo, we don't have much room for excessive draw before the quad quickly becomes unflyable and we enter into sub 1 minute flying sessions. With that in mind let's test the camera at a few different voltages and compare to the FX797T to see how it lives up compared to its specs.

I chose to run the test at 3.8v instead of the "standard" 1S voltage of 3.7v because the Tiny Whoop tends to go into "battery low" mode around this voltage, where flying is not possible, so this is realistically the lowest voltage you will see when flying this quad.

What we can see straight away is the power usage is definitely increased above its rival, around 30%, again a similar story compared to the weight.

So with those in mind - it's a heavier camera that draws more power - what are we expecting to see when we test it? Well, for one the EF-01 has been well-praised for being a much better picture on the camera, and others have stated similar range. I must admit the picture quality and low FoV (120 degrees) of the FX797T is a little annoying, so I am just hoping if flight times are not reduced too much with said increases then the camera picture maybe worth it.

I set out and tested both cameras in my garden. It's a little windy at current, but I wanted to test outdoors because of how much of a difference CMOS low light performance can be.

From my personal thoughts, the colour profile of the EF-01 far exceeds the FX-798-T, however that's really where the positives (for a Tiny Whoop I must add) stop. The camera reduced my flight time on average of 58 seconds for a fully charged lipo, and I did not like the light switching when viewing sunlight, it made everything go far too dark making it awkward to see everything. Range was around the same of both cameras. I'd attribute the shorter flight time to both the weight and extra power draw of the camera.

If you were looking for a micro camera for a micro build (perhaps around a 100mm), then this camera would be a great candidate, as for the Tiny Whoop I'm not sure it holds up well. I also found the extra length of the antenna to be quite annoying when trying to make small gaps, as it extends the height of the Tiny Whoop quite considerably.

Conclusion: A pretty respectable camera for the money, for quads larger than the Inductrix.